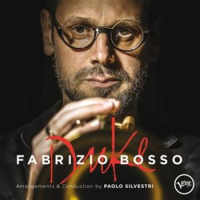 Italian post-bop trumpeter Fabrizio Bosso from Turin, Italy, is not yet a household name in the American musical landscape however, he is no novice to the jazz idiom either. A veteran trumpeter who has preferred the vibrant and more receptive jazz scene in Europe over the states, has during his burgeoning professional career, recorded seventeen albums since his 2000 debut as leader on Fast Flight (Red Records, 2000). An award-winning artist who performs regularly at the annual Umbria Jazz Festival and has recorded as a sideman and soloist with such jazz luminaries as Carla Bley, Maria Schneider, Ryan Truesdell and Wayne Marshall among others, Bosso reaches out to a new audience on this endeavor.

On this excellent project, Bosso unveils his fourth album as leader on the Verve/Universal label with Duke, a heart-felt tribute to Duke Ellington offering new renditions of familiar classics presented by a superb European quartet supported by the six-piece Paolo Silvestri Ensemble. The new arrangements penned by pianist/composer Silvestri, provide fresh new swinging treatments to old warn-out standards that make the seven-piece repertoire of familiar songs sound almost new. The ten-minute plus "I Let A Song Go Out of My Heart," begins the tribute in stylish fashion with the maestro blowing a stern horn as the band delivers the big band atmosphere associated with the piece.

Ellington's oft-recorded "Caravan" charges out of the gate in high gear in one of the most up tempo, lively renditions of the tune one will ever hear featuring a fast, high-pitching trumpet sounds from the leader and a rousing band where pianist Julian Oliver Mazzariello and drummer Nicola Angelucci provide splendid solo performances. Another classic presented here is the immortal "In a Sentimental Mood" rearranged and showcasing the leader on the flugelhorn laying down a soft line in the ballad of the disc.

Now, there's not much of a tribute to the Duke if you don't include "It Don't Mean A Thing (If It Ain't Got That Swing) delivered here in a fast and furious tempo featuring Michele Poga on tenor and Marco Guidolotti on the baritone lobbying salvos at each other as Bosso's trumpet decides to join in the fun chasing the quick tempo as each player plays with power. Silvestri's arrangement of "Black and Tan Fantasy" and "Jeep's Blue," brings the tunes together in a medley featuring some great play and a bit of the muted horn from the leader.

Pianist Mazzariello gently introduces the Ellington classic "Solitude," the other warm-textured ballad of the album ably supported by the reeds of the Silvestri Ensemble resulting in one of the highlights of the recording. After a session of wonderful Ellington music, the music winds down and closes much like it began, in swinging style on a high-flying, hard-driving version of "Perdido" and showcasing the solid big band sound a quartet and a quintet together, can produce. A well-conceived and fascinating homage to an icon, Duke is European Trumpet Master Fabrizio Bosso's explosive coming out party to an American legend.

Track Listing: I let a Song Go Out of My Heart; Caravan; In A Sentimental Mood; It Don't Mean a Thing (If It Ain't Got That Swing); Medley: Black and Tan Fantasy/ Jeep's Blue; Solitude; Perdido.