By MARK CORROTO
January 1, 2003
Sign in to view read count 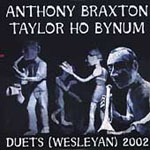 Extracting information (and sometimes pleasure) from an Anthony Braxton large ensemble recording is often an arduous task. The music's density and somewhat impermeable nature often exhausts a listener's patience. Somehow this has rarely been the case with his duo recordings. Duets with Max Roach, Georg Grawe, Gino Robair, Evan Parker, Derek Bailey, and now Taylor Ho Bynum lend insight into one of the true musical geniuses of our time.

Joining Braxton is cornetist Taylor Ho Bynum, Braxton's masters student at Wesleyan University. Bynum is no novice. He has recorded with Braxton's larger ensembles, made two nice duets discs with drummer Eric Rosenthal, and is a member of the Fully Celebrated Orchestra, which is a sort of 21st century update on Ornette Coleman's early 1960's band.

This post-Ghost Trance 2002 recording finds Braxton switching between saxophones and his much loved clarinets. The pair mixes up the session with two compositions by Braxton, three by Bynum, and a spontaneous improvisation. The relaxed nature of these tracks is the story here. Neither player grandstands, opting for fidelity to the compositions and deference to the other player. Not that there aren't moments of outstanding merit, such as Braxton's verbal overblowing on "Scrabble, his circular breathing on "Composition 305, and Bynum's deft mute work. The pair work through minimalist breathing exercises on Bynum's "To Wait and a jocular post-bop romp with "All Roads Lead To Middletown. Bynum seems to be following the pathways of modern trumpeters Bill Dixon, Don Cherry, and Axel Dorner. He extends the possibilities of the trumpet, yet includes us along for the ride. This is a highly accessible and very enjoyable date.