Maximize your visibility at All About Jazz by upgrading your musician page from standard to premium. With it, you'll receive All About Jazz home page exposure, a highly stylized / ad-free musician page with bonus features and benefits, an ad, plus you control where you sell your music and so much more.
Learn More
173 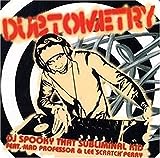 Formally Dubtometry represents a remix of 2002's bold jazz-tronic record Optometry. Indeed, the common denominator remains DJ Spooky, who produced this 17-piece set. But the comparisons between hip-hop and jazz, which Spooky so effectively blended on last year's record, end right there. It might be jazzy, but this is a straight-up hip-hop record, no matter how you cut it.

So take it on its own terms. Absolutely nothing wrong with that. For Dubtometry, Spooky (aka Paul D. Miller) brings ten of his colleagues to celebrate the mature art of hip-hop culture. At the center of hip-hop music, of course, stands the DJ—and one look at the cover affirms the essential presence of vinyl on this record. But the arsenal of tools available to today's remixers extends far beyond the turntables, including vital elements created by knob-twiddlers and black box-builders in Jamaica decades ago. Thus the dub.

J-Live hits the funky beats head-on with "Optometrix," which is relatively unusual here because it features extended work by an MC. He muses, "What is it, jazz? Is it hip-hop?" (Ummm... I think we already answered that question.) Touches of rather adventurous harmonic color fade in and out of the intro, as swirling drum crashes coalesce into a regular funky beat. It might not be jazz, but it begs (and deserves) to be taken seriously.

Lee "Scratch" Perry pops his head in on the next track, proclaiming "I am a monkey!" before wandering down a path paved by evenly-paced piano blocks from the hands of Matthew Shipp. Psychedelic and propulsive, dub is not a force to be ignored. The reverberations of music neither here nor there come to realization on "Twilight Circus," a paced excursion through dark echoes and blips, led by Joe McPhee's mysterious, hovering muted trumpet.

Ugly moments appear here as well. Colorform's mix is an exercise in outdated, rhythmically stale ethno-techno, best ignored despite its occasional eccentricities. Negativland take the very best moments from Optometry ("I got two turntables and Coltrane!") and chop them into sharp, totally undigestible fragments. And quite honestly, Alter Echo nearly destroy the record with a short, completely out-of-place (and out-of-tune) ditty on the United Nations.

But, damn, check out "Parachutes"! It's funky in the extreme, with some seriously deft human drumming scattered in and among the looped beats. Bell-like tones reverberate above and below the music's center, which lies on a fuzzy line illuminated by flute breaks and dipping tenor swirls. This is the kind of music that makes hip-hop strong—a blend of voices, built to form a synthetic whole, with a very simple goal in mind: to bring people together and ensure they have a good time. Enough said.

Visit Thirsty Ear on the web.