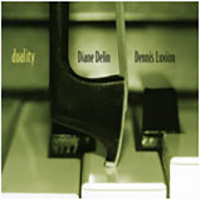 The violin is one of those overlooked instruments in jazz, rarely heard but often memorable. From the early swing of Stephane Grappelli to the Coltrane-informed work of the late Zbigniew Seifert, from the more contemporary fusion of Jean-Luc Ponty to the stylistic breadth of Mark Feldman, the violin clearly works in an improvising context, yet it's one of those instruments that just don't seem to resonate with the broader listening public. And that's too bad, because it can be one of the most expressive, ranging from delicate and tender to sharp and aggressive. Diane Delin works at the more elegant end of the spectrum, and pianist Dennis Luxion, her musical companion on Duality , is clearly in synch with her graceful approach and lyrical disposition.

On a programme consisting of eight originals, four each from Delin and Luxion, as well as two standards and one arranged traditional Irish piece, the duo work hand-in-glove, with a refined sense of swing and pure melodic sense that makes for a completely engaging and enjoyable set. The two have worked previously on Delin's previous two releases, Origins and Talking Stick ; it was, in fact, on the latter that the two first recorded two tracks in a duo setting, and it was obvious from thje result that they were deeply sensitive to each other.

The executive producer, Gary Pasenko, recalls a magical moment from the rehearsals for this session: "After a few hours of not hearing any sounds coming from one of their rehearsals, I decided to investigate. I discovered that they were looking at the music, playing and hearing it in their minds and discussing changes without touching their instruments." This kind of empathic behaviour, where the music was being intuited without even being played, represented an auspicious beginning for what has ultimately turned into a recording of equal enchantment. From the dark and brooding "Nuage Vide" to the more cultured swing of "Controlled Skid," the duo creates a rich ambience that has precedence in the work of Bill Evans and some of Chick Corea's duo work, but has a sound all its own.

Delin favours the mid-range of the instrument, creating a sound that is never sharp or harsh. Luxion's touch is gentle but firm, with a playful left hand that brings Corea to mind, but without the Latin element. Together they create a sound that could be called chamber jazz, but is more insistently rhythmic. Even the final tune, "Parting Glass: Air & Reel," a traditional piece that Delin begins solo, ultimately ends up being more of a romp as Luxion brings in a more frolicking touch.

Duality , by strict definition, concerns the state of having two natures, but while there are two distinct personalities at work here, the end result is clearly more a union, the joining of two musical halves into one spirit, one mind. Delin and Luxion, with their unquestionable attentiveness to each other's directions, have created an album that speaks with a single voice.