Home » Jazz Articles » The Fully Celebrated: Drunk On The Blood Of The Holy Ones

The Fully Celebrated: Drunk On The Blood Of The Holy Ones 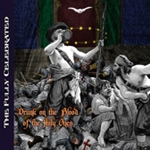 Drunk On The Blood Of The Holy Ones is The Fully Celebrated's AUM Fidelity debut. Their seventh album and first release since 2005's Lapis Exilis (Skycap), this date breaks new ground for the stalwart trio by making the studio an integral element of the recording.

Hobbs, the leader and primary songwriter, is one of his generation's most gifted altoists; his ability to effortlessly glide between pitches and microtones enables a boundless capacity for tonal expression. His wry sensibility extends beyond his wily phrasing and slippery themes into his quirky song titles. "Moose and Grizzly Bear's Ville" opens the album not with lumbering force, but lilting delicacy. Embellished with minor melodic variations, the infectious number reveals funky bass and drums percolating under a sunny Ornettish theme reminiscent of Coleman's Prime Time. "Reptoid Alliance" follows, veering into more familiar territory. Hobbs' pungent alto expels oblique cadences peppered with stuttered multiphonics as he interlocks with Carranza's crisp downbeats and Shanko's throttling bass lines—a classic Fully Celebrated groove that deconstructs into roiling free-form interplay.

Despite their limited instrumental palette, the trio explores an array of styles. Hobbs lends an Asiatic tonality to "Brothers of Heliopolis," pinching his malleable timbre into the soprano range, while "Pearl's Blues (Your What Hurts?)" finds the trio embellishing a traditional structure. Shanko and Carranza sabotage a straight blues with cagey interjections while Hobbs worries a nagging motif with his highly vocalized delivery.

"Conotocarius" and "Dew of May" demonstrate their dynamic range; the former is a vociferous three way conversation careening with spasmodic frenzy while the later conjures a lyrical ballad from silvery long tones stretched across a reverb drenched vista.

Filled with memorable melodies, stirring interplay and a wealth of sonic variety, Drunk On The Blood Of The Holy Ones is a welcome return from one of the most resourceful saxophone trios working today.

Moose and Grizzly Bear's Ville; Reptoid Alliance; Drunk On the Blood Of the Holy Ones; Brothers of Heliopolis; Enemy of Both Sides; Pearl's Blues (Your What Hurts?); Conotocarius; Dew of May.

Title: Drunk On The Blood Of The Holy Ones | Year Released: 2009 | Record Label: AUM Fidelity

About The Fully Celebrated