BY MATT MARSHALL
February 1, 2011
Sign in to view read count 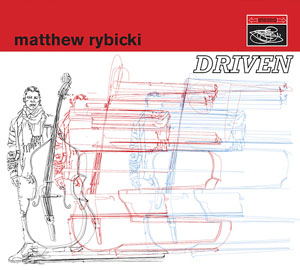 Driven may seem a curious title for the debut album of a 37-year-old artist. But it's likely bassist Matthew Rybicki chose the title more as a pronouncement of his musical tastes ("It's definitely critical for me to be trying to swing all the time," he has noted) and, perhaps, of the bassist's role within music, generally.

A self-described latecomer to the jazz game, Rybicki played in rock bands until entering the Berklee College of Music, and he cites this transition as the main driver in his decision to delay releasing an album as leader of a jazz group. Around him, he has gathered a nice group of talent, including contemporaries—saxophonist Ron Blake and trumpeter Freddie Hendrix—plus young guns—pianist Gerald Clayton, trombonist Michael Dease and drummer Ulysses Owens Jr. Owens plays a pivotal role here, trading often with the others if not breaking to the fore for hard-swinging yet complex solos. He also doubles as producer, so this outing should project him as a multifarious talent with which to be reckoned. Dease and Clayton are both on the cusp of springing into the spotlight as major players, and their contributions here provide vital lift. Clayton's playing is especially notable, coursing with an affable, yet slightly off-center energy that cuts a jagged edge to the album's mostly straight-ahead, bluesy drive.

Rybicki commands a strong, pliable tone that signals him the expect leader of the dance, effortlessly twirling his partners through complex rotations, then slipping unnoticed from support role to front-and-center. The appropriately humming title track—one of nine Rybicki compositions on the album—is a prime example of the bassist's control, as he plucks warmly under Blake's blues-laden bop and Clayton's jumping chordal runs, before whisking away to spin on his own with restrained aplomb, trade with Owens and lift the piece back to group celebration. Two trio pieces (with bass, piano and drums) follow "Driven" to great effect: the swampy blues, "Lowcountry Boil"; and a propulsive, skipping reading of the standard, "Secret Love." "Yellow Bird" provides a welcome jaunt into the realm of calypso, while Rybicki closes with his most complex composition of the set, "Nouakchott," a surging, African-flavored piece that features passionate, screaming statements from Hendrix and adds Matthew Baranello's African percussion and Selloane Nkehla's vocals.

Rybicki and crew don't plow into new, wild terrain on Driven, but it's a highly enjoyable, well-regulated record that doesn't hurt for surprises. And all from a cast of musicians clearly on the move.

The Slow Stride; Seventh Sun; a Mean Lean; Yellow Bird; Lisa's Song; Big Money and the Left Side; Someday I May Be Far Away; Driven; Lowcountry Boil; Secret Love; Nouakchott.