Van Morrison: Down the Road 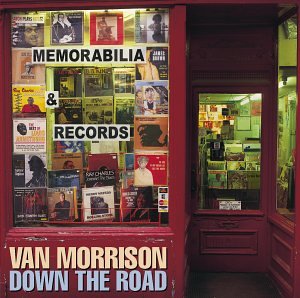 A Ray Charles from Belfast...

I used to wonder if there were any other artists like Ray Charles. Mr. Charles has made significant contributions to all of the flavors of popular music: the Blues, Jazz, Soul, Rhythm & Blues, Gospel, Country, and Rock & Roll. He made these contributions in a voice so distinct and unique that anyone could identify him from a mile away. When Terry Gross of National Public Radio's Fresh Air asked Charles what genre of music he played, he responded that it was not a certain kind of music; it was "just music." Ray Charles may be the closest thing to a living treasure as one can become. Nevertheless, are there any other artists for whom the same can be said? Damn few, I have realized, but after listening to Down the Road, I know Van Morrison is one of them.

This hyperbole is not because Down the Road is his best recording; it is not. Nor is it because the recording is his first of predominantly original compositions in several years. After 30 years of making music, Morrison has created a seamless synthesis of all genres of music, producing a distinct and unique voice that anyone could identify from a light year away. With a seemingly total lack of effort, Morrison weaves country, blues, and R&B into the fabric of an Irish Lullaby ("What Makes the Irish Heart Beat"), and that is just for beginners. Mr. Morrison has always provided us with melodic hooks that immediately become a part of our collective musical consciousness. "Brown-eyed Girl," "Wild Night," "Moondance," "Tupelo Honey" and those are just the main ones. The collection of Gaelic Romanticism on Down the Road is in stark contrast to his cultural invectives displayed on Hymns to Silence and Days Like This. Morrison is at his happy eclectic best.

William Rhulmann has described Van Morrison as "...equal parts blue-eyed soul shouter and wild-eyed poet sorcerer." Indeed. He is a master alchemist working with available musical forms, mixing and making at his whim and his whim alone. The result is the freshest music ever based on three (or four) chords. The title cut is a curious combination of R&B with a whiff of the Islands. "Meet Me in the Indian Summer" is an effortless uniting of Memphis Soul with Zydeco and the Muscle Shoals Horns, fueled by Martin Winning's tenor saxophone and clarinet. This song also serves, by way of Bobby Irwin's clever drumming, as the hook that remains in the listener's mind long after the disc is played. "Steal My Heart Away," "...Irish Heart," "Only a Dream," and "The Beauty of Days Gone By" meld the Irish and Yankee folk traditions. The lone standard, "Georgia on My Mind" is presented in Morrison's most wonderfully idiosyncratic manner. Morrison infuses Hoagy Carmichael's song with more blues than were already there. Speaking of the blues, they are always well represented on Morrison outings and show up as, "Talk is Cheap," and " Choppin' Wood." "Hey, Mr. DJ" has the most commercial potential reminding me (not unkindly) with Billy Joel's An Innocent Man.

I am not sure that I have heard a bad Van Morrison Album. I am also not sure I would admit it if I did. All I know is he has a Midas touch with music, all music and any release of new music should be treated as the event it is. Down the Road is no exception.

Down The Road, Meet Me In The Indian Summer; Steal My Heart Away; Hey Mr. DJ; Talk Is Cheap; Choppin' Wood; What Make An Irish Heart Beat; All Work And No Play; Whatever Happened To PJ Proby; The Beauty Of Days Gone By; Georgia On My Mind; Only A Dream; Man Has To Stumble; Evening Shadows; Fast Train. (Total Time: 67.14).

Van Morrison-- guitar, harmonica, and vocals and an Irish cast of thousands.