By DAN MCCLENAGHAN
February 6, 2019
Sign in to view read count 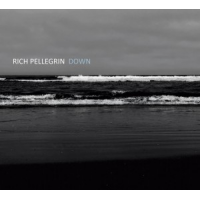 In an All About Jazz review of pianist/bandleader Richard Pellegrin's Episodes IV-V (OA2 Records, 2015), the author states that Pellegrin's style lies "somewhere in the middle of the spectrum between jazz and 21st century classical music." That also holds true with Down, the third quintet offering from the Assistant Professor at Florida State University.

And if the music leans in the direction of jazz, it's of the accessible avant-garde variety.

Down features seven tracks from Pellegrin's pen, starting with "Trial," an adeptly arranged quintet piece featuring two stellar solos—one from the leader on piano and one from saxophonist Neil Welch. Pellegrin's piano style—and the composition itself—feel like something the late pianist Andrew Hill (1931-2007) might have done, not particularly in technique, but in the off-center originality and energy on its long and winding percussive road that leads to the the tenor sax turn. Saxophonist Welch cranks up the "ominous" with a low-in-the-throat growl inside the tumult of Evan Flory-Barnes' bass and Christopher Icasiano's drum backdrop. A marvelous opener.

"Birthright" is more pensive, and more about the group interplay gathered around the solos; and the same can be said for the title tune, with its emotive and mournful trumpet turn from R. Scott Morning.

The first five cuts on Down were recorded during one studio session; the last two, "Down (Introduction)" and a second take on "Down" were recorded in Memorial Baptist Church, Columbia, Missouri, with the core quintet augmented by the seven piece Mizzou New Music Ensemble—two reeds, two percussionists, a violin, a viola and a cello. This classical group—presumably not as familiar with improvisation as the jazz quintet they join here—helps create a rich, expansive and beautifully-textured sound experience, featuring masterful solos from saxophonist Welch and bassist Flory-Barnes that are "not ordinary solos," according to Pellegrin. Indeed, not your ordinary jazz album, in the best possible sense of "not ordinary."