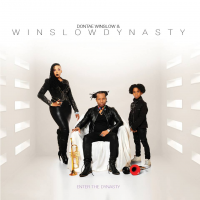 It seems that one need only bat an eyelash to miss out on some of the heavy young musicians that are coming down the pike, let alone the ones who've become pretty well-established. A case in point is a young trumpeter / producer / rapper / educator Dontae Winslow. Though he appeared on recordings by Hugh Ragin's Trumpet Ensemble (Fanfare and Fiesta, Justin Time, 2001) and Roy Hargrove & the RH Factor (Hard Groove, Verve Records, 2003) over a decade ago, Enter the Dynasty is only Winslow's fourth album as a leader. In the meantime, the Baltimore native accumulated an impressive array of high-profile performing, recording and producing credits in the hip-hop and R&B arena with artists such as Kanye West, Justin Timberlake, D'Angelo, Jay-Z, Jill Scott, and a host of others. A graduate of the Johns Hopkins Peabody Conservatory, Winslow was a semi-finalist in the 1997 Thelonious Monk International Trumpet Competition, and won the prestigious Peabody Young Maestro Award in 2013.

Tempered, perhaps, by the experience of playing in front of huge audiences on a routine basis, Winslow's playing is completely assured and bold. Liberally incorporating Gospel, fusion, R&B, and funk influences, Winslow's composing and quick-witted trumpet playing throughout Enter The Dynasty nevertheless belies a continued immersion in jazz, both modern and traditional. Instead of spreading his considerable talents too thin, the dizzying stylistic variety here demonstrates that Winslow can thrive creatively in pretty much any musical setting. As a producer, he demonstrates the ability to sculpt these diverse tracks into a remarkably unified artistic statement. The veritable army of musicians featured on Enter The Dynasty represent a Who's Who of the extraordinary young musical talents circulating through the hip-hop and pop worlds. Winslow's also corralled a clutch of very impressive ringers from the jazz world for this project, including Hargrove, Chick Corea, Antonio Hart, Questlove , and Kirk Whalum to name just a few.

Throughout Enter The Dynasty, Winslow artfully balances the more challenging aspects of his music with more easygoing elements that are sure to appeal to a wider audience. Nevertheless, there is a surprisingly large amount of substantial and uncompromising jazz here. "Baltimore Crabcakes" is a funk tune from a time before the advent of slap bass and wah-wah guitar. The funk here is the bluesy, Gospel- infused, grits-and-gravy sound of Jimmy Smith, Horace Silver, and Lou Donaldson; the perfect vehicle for Winslow and Whalum to strut their soulful stuff. Whalum's also aboard for "Kings," a sweet slice of funky-but-sophisticated fusion a la Snarky Puppy enlivened by Spanky McCurdy's amazing drumming. The fusion envelope gets pushed hard on "Blaxploitation," a phantasmagorical stew of wailing, hard-hitting rock, jazz, and funk set off by Winslow's breathless no-nonsense rapping and Mashica Winslow's over-the-top operatic vocals. The only other artist I can compare this crazily intense and beautiful track to is Stanton Davis' Ghetto Mysticism. On the other hand, "Chrysalis" is sweet, easygoing funky-fusion jam with more impressive drumming (this time courtesy of Brian Frasier- Moore) framing thoughtful solos by Winslow and Chick Corea. On the gentler side of things, the album's ballads explore different aspects of things soft and downtempo. "He Is" is a lovely inspirational ballad, while "Red Lingerie"-featuring an alluring, sensual vocal by Mashica-uses the ballad form to muse on a completely different side of life. "Mashica & Jedi," dedicated to Winslow's wife and son, is sweet and direct with a sparse string backing. "Dontae's Inferno," which starts out as a rhapsodic acoustic ballad, is a complex modern jazz piece that edges into high-energy terrains during impressive solos by Winslow, pianist Miro Sprague, and tenor saxophonist Walter Smith III. Pianist Sam Barsh and bassist Edwin Livingston join Winslow on "2304 West North Avenue" in a tough little jazz trio that gives the leader a chance to really stretch out. As a trumpet soloist, the classically-trained Winslow is definitely in the Wynton Marsalis / Terence Blanchard lineage, though his playing has an appealingly emotive rawness missing from a lot of 21st Century jazz. A highly technical and proficient player, his solos are full of unexpected and dramatic trills, flutters, rips and partially- valved slurs.

Hip-hop influences figure into the album's closing tracks. "Summer Cookout" is an unpretentious slice of pure fun; Winslow 's wah-wah trumpet converses with Hargrove's flugelhorn over gospel-saturated organ, wordless vocals and Questlove's shambling good-time drums. "Drinks on Me" summons up a harder-hitting Funkadelic-inspired party vibe replete with screaming guitars, subsonic bass and masses of synth burbling up beneath solos by Hargrove and Winslow. Though it's not his debut album, Enter the Dynasty captures the excitement and fire of an unusually accomplished young artist's first release. This is a truly auspicious album that covers a lot of stylistic ground in a creative and personal manner, while establishing Dontae Winslow as a name to look out for in the jazz world.