By Samuel Chell
September 16, 2006
Sign in to view read count 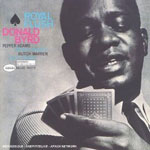 One of a handful of Rudy Van Gelder remasters released this past August, Royal Flush would be welcome if only because it's the recording debut of Herbie Hancock. Looking all of fourteen in the photo included with the accompanying booklet (he was 21 at the time), Hancock plays like a seasoned pro on what was, in fact, his actual "maiden voyage." Even apart from the pianist's brilliant playing, Royal Flush is a winning hand played by trumpeter Donald Byrd, arguably the best recording date under his leadership.

The opener, Byrd's "Hush," sets the tone for the entire session, which emphasizes uncommon restraint, nuance and subtlety without for an instant losing its soul. An infectious, gospel-inflected blues in C, "Hush" opens with a rhythmic structural pattern that is maintained through each of the solos: eight bars of stop time (in the manner of the Harlem Globetrotters' "Sweet Georgia Brown"), followed by a four-bar shuffle-rhythm trailer. Byrd's minimalist, alternately sly and plaintive solo serves to set the stage for the laconic statements of Pepper Adams' baritone sax and Hancock's piano which, contrary to expectations, reveals not the slightest trace of overplaying on what must have felt like a momentous occasion for the recent college graduate.

"I'm A Fool To Want You," the only standard on the program, is both ballad- and trumpet-playing of the highest order. If it truly was Ava Gardner who elicited from Sinatra the torch song that has frequently been called his most deeply felt performance, she must have had the same impact on Donald Byrd, who turns in the instrumental equivalent of Sinatra's reading, right down to Old Blue's "breathless" phrasing. The trumpeter takes the song through only once, melding extraordinary technique with sensitive musicianship when he employs circular breathing to extend the two most important notes of the bridge, practically effecting the suspension of time at the point where the lyric laments a love lost.

"Jorgie's," another Byrd original, is a compelling, delicate melody featuring a sterling Hancock introduction and solo. Moving between graceful bitonal passages and suspensions played over a Bb pedal point, the pianist eventually settles into a strikingly beautiful mid-register, block-chorded solo reminiscent of Bill Evans' playing on Miles Davis' Kind Of Blue (Columbia, 1959) as well as on the Davis recording of "On Green Dolphin Street" (Jazz Track, Columbia, 1958). "Shangri-La" (not the familiar pop tune) is a modal piece featuring Byrd's compositional adventurousness along with some Hancock melodic patterns and voicings that owe more to McCoy Tyner than Bill Evans.

Donald Byrd and Pepper Adams enjoyed an extended musical partnership, based on personal compatibility and mutual respect for one another's playing. A pyrotechnician on the big horn, Adams doesn't have to give an inch to the fleet masters of the smaller and lighter saxophones. Admittedly, his penetrating, unmodulated tone can be somewhat of an acquired taste, like Jackie Maclean's "in-your-face" sound on alto. On "Royal Flush," however, the baritone saxophonist plays with rare restraint and exquisite musical taste from his first through his last notes, wrapping each of his phrases in an expressive, warmly reassuring purr. In the new liner notes, Bob Blumenthal provides a fascinating look at the co-leaders' efforts to work Hancock into the group without undue offense to his predecessor, Duke Pearson, himself a capable pianist and composer.

Royal Flush might go down as a near-perfect session were there not some sense of anti-climax during the final two selections: Byrd's "6 M's" is another laid-back blues in C (at least in 6/4 this time), and Hancock's "Requiem" is quite close to "Shangri-La" in modality and rhythmic form (despite the unusual inclusion of a Butch Warren bowed bass solo). A single up-tempo number with ample blowing time for all three soloists would certainly have done the trick. On the other hand, the most enduring and perpetually fresh jazz recording ever made—Kind Of Blue—has no fast tunes, leading this reviewer to ponder the difference between the two recordings.

Rather than immediately point to the musicians involved, a listener might do well to consider the effect of the engineering itself. Kind Of Blue uses a three- dimensional aural canvas, imparting a feeling of spaciousness and depth through attention to audio imaging and ambient acoustics. By contrast, Van Gelder's surface is flat, setting off each instrument with up-close presence and equal clarity, magnifying and enhancing the sound of some instruments while altering the sound of others. Anyone who is familiar with even a limited number of Blue Note recordings should have little difficulty identifying the "Van Gelder piano" on a blindfold test, making it tempting to imagine the result had Kind Of Blue not been recorded on Columbia. Tastes will vary, but one thing is certain: it would not be the same recording.