By Doug Collette
February 28, 2016
Sign in to view read count 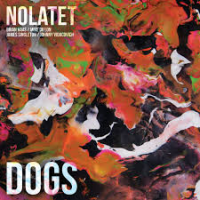 The wit in the name of Nolatet finds a direct reflection in the music they make. Yet together as a four piece unit, keyboardist Brian Haas (Jacob Fred Jazz Odyssey), vibraphonist Mike Dillon (Critters Buggin,' Garage A Trois), bassist James Singleton (John Scofield, John Medeski) and drummer Johnny Vidacovich (Charlie Hunter, Robert Walter), create a seamless sound that transcends comparisons to their previous work. No question Dogs is steeped, and deeply so, within the grand tradition of New Orleans, but even as Nolatet pay reverent homage to the Crescent City, they do so only fleetingly as they nod to their own previous work.

Thus, "Pops" hearkens to the atmospheric likes of Haas' work with JFJO even as Singleton's bowing calls to mind his trio outing with drummer Stanton Moore. Likewise, his jaunty intro to "Bongo Joe," as he's joined with Vidacovich in a parallel bounce, gives way to recurring stretches of melody, explored by Haas on acoustic piano, underpinned with their fused rhythm work. At moments like these---and there are more than a few of them here—it sounds like there were more than four musicians within NOLA's Esplanade Studios making this album.

In a marked contrast to his often jarring eccentricity, Dillon knows when to lay out and remain in the shadows of deep support, no doubt fully aware he gets his room to shine when it counts, as in his point counterpoint with Haas, again on grand ivories during the title song. No man in this band remains invisible or inaudible for long though and each has a savvy instinct for when to step up, as does Singleton here, after Vidacovich's brushes enact a gateway for him to enter.

The sound of Nolatet is invariably intimate, as if conjuring the air of a jazz club long closed, where the band picked up their instruments to pack up and leave, then began to play instead on the spur of the moment. "Morphine Drip"/"Lento" has such a casual air, at least at the outset, where a flurry of notes orbit around similarly offhanded beats, just before a rumination on a likewise shadowy tune, comes and goes in a fashion as quick as it is subdued.

That cut is like the album at large, short on duration (Dogs clocks in at approximately thirty minutes ), but deep on impact. These studio takes on this all-original material, like "There's No Fire," are authoritative outlines for live improvisation, nevertheless standing on their own terms as definitive recordings. Kudos to Nolatet for not prattling on instrumentally when they have nothing more to say, but instead, during the Dillon-dominated "Melon Ball," slipping into the groove, at the heart of the song, then digging into it.

The band strides right along during the latter movement of that track, showing even more restraint by ever so carefully inaugurating the conclusion of this record in the form of the appropriately-titled "Nails:" their sound is as tightly sealed as this arrangement which Nolatet nevertheless allows to breath as each member judiciously and (mutually) respectfully offers his participation. It's a tantalizing approach to improvisational musicianship that no doubt has as much of an enticing, intoxicating effect on the players as listeners.