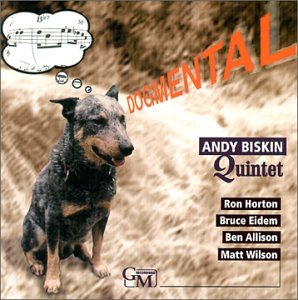 Jazz history is chock full of stories of popular jazzmen who began on clarinet, later shedding the black stick for the much cooler, chick-magnet saxophone. But times change, and just as America’s richest man, a pocket-protector wearing nerd is somehow admired, the clarinet has shed its stigma. Like Don Byron, Marty Ehrlich, and Chris Speed, Andy Biskin’s clarinet explores a thoroughly modern music. Like Byron’s Bug Music Biskin’s original music explores the territory once tread upon by John Kirby and Raymond Scott.

Biskin’s liner notes cite The Hungry Five as his earliest influence. The corny jokes and wacky uniforms might have been shed, but not their humored influence. Maybe it’s the clarinet that allows for the levity. Biskin’s music, like that of Phillip Johnston or The Kamikaze Ground Crew, uses merriment as its foundation. Writing waltzes, marches, and polkas for jazz invokes memories of cartoons and slapstick. Like Raymond Scott, Biskin begins “My Sentiments Exactly” as a classical chamber piece or he runs through a waltz on “Rondel.” This is circus music, piano-less and at times like vintage Ornette Coleman’s two-horn frontline emulating the give and take of a New Orleans ensemble. He takes on modern cool jazz too with “Off Peak” and its grinning bebop swing.

Biskin’s working band of Eidem, Eulau, and Hall play four tunes and the assembled young jazz stars cover the remaining tracks. And he could not have picked more sympathetic cohorts. Drummer Matt Wilson is hardwired for humor, the brilliant wit of his Palmetto recordings has gained him both critical and popular attention. Likewise Allison and Horton have explored the quirkiness of Herbie Nichols. Biskin loves to interact with Wilson, trading horn lines with the drummer playing his entire kit.

Not all clarinet music is Klezmer. Biskin proves that creative music can be fun and witty, even without the suspenders and funny hats.