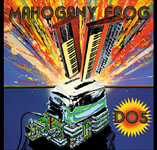 This is music made of big gestures joyfully subverted. A flash of progressive rock—in the narrowest, most virtuosic sense of the term—is figuratively taken outside to be administered a kicking. In addition and just for good measure, or perhaps in the interest of dynamic variation, a lyrical strain emerges when the music does get quieter and more reflective, which goes to show that this is also a band big on variation.

In terms of the overall context, the opening "G.M.F.T.P.O" is seemingly all gesture with its blustering, overdriven guitars, but it proves only to be a point of entry. This is just as it should be, especially when "You're Meshugah!" comes on rife with the nastier sounds it's possible to coax out of good old analogue synthesizers; the kind of fiercely diffident complexity reminiscent of Hatfield And The North in their prime along with a melody that's nothing if not catchy at around the two and a half minute mark.

Those big gestures referred to above come to the fore on "You're Not My Sugar," a title which if based on aural evidence alone, should have an accompanying exclamation mark. Again the guitar is overdriven to the point of distraction but thankfully not in the service of fingers flying over frets. It amounts to a whole lot of nothing anyway as this is a band dead keen on dynamics and the galumphing "Demon Jigging Spoon" which follows soon dissolves into a tricky interlude where the accelerator is eased off and the music gets a chance to breathe.

"Medicine Missile" pulls back even further, the music seeming at times to dissolve in a sea of echo which has the effect of lending significance to every note. Again, the virtuosic trope is wilfully undermined even when the tempo is upped and heads might indeed bang.

"Loveset" closes the disc out with neither a bang nor a whimper, but that's only a good thing as this is music in which contour has far greater importance than mere grandstanding. A reflective trumpet fanfare bears out, lending the piece a curious dignity and the album as a whole a kind of seamlessness; as if for its duration the listener has been privy to the evolution of a work in constant progress.