The North Mississippi Allstars: Do It Like We Used to Do 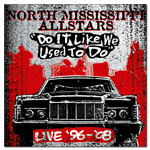 The North Mississippi Allstars' youth belies its history, as documented on Do It Like We Used to Do. Over the course of two CDs and a DVD featuring archival material, interviews and concert footage, the band displays reverence for the music it plays, without ever taking itself too seriously.

Reasonably priced in skeletal packaging with colorful and information-laden graphics simulating a scrapbook, this three-disc set ostensibly covers the first twelve years of NMA history, from 1996 to 2008. Yet this anthology spans more than just a story of a band; it's a musical tradition, of which guitarist/vocalist Luther Dickinson, drummer/multi-instrumentalist Cody Dickinson and bassist Chris Chew are a part.

The antique sound quality on much of the first disc suits the earthy likes of Fred McDowell's chain-gang song, "I'm in Jail." The NMA's moniker takes on a whole new meaning during the course of this compilation, as the core trio is joined in turn by various instrumentalists and accompanists, including full-fledged units like Otha Turner's Fife and Drum band and famed musician/producer Jim Dickinson (Rolling Stones, Big Star, Ry Cooder, The Replacements), father of the NMA siblings.

Recordings sites range from the intimate likes of New York's Beacon Theatre in 2006, where the band draws upon Jimi Hendrix in "Hear My Train A-Comin,'" to the more expansive eclectic likes of Tennessee's 2004 Bonnaroo Music Festival, where the Hill Country Revue delves deeper into the roots of this music with the aid of musicians R.L. Boyce and Duwayne Burnside.

Luther Dickinson oversaw this exhaustive compilation, and he's both sufficiently objective and astute enough to include the acoustic likes of "Goin' Home ML," a lilting sing-song piece offset by the hammering riff of "Keep the Devil Down." Ever so slight overlap comes in the form of selections from the band's studio release, Hernando (Songs of the South, 2008), such as "I Would Love to Be a Hippy," and "Mizzip," which was recorded at The Fox Theater in Boulder, Colorado for the double-CD concert recording Boulderado (Songs of the South, 2009). Yet none of the anthologized material becomes redundant in this context.

Within a well-paced sequence of selections, the DVD portion, like its two audio counterparts, contains none of the ultra-high-intensity moments that this band is capable of. Nevertheless, there is a consistent flow of momentum despite varying audio and video fidelity; this erratic element ends up adding to the authenticity of the experience that director/producer/editor Aaron Farrington is trying to convey. As captured on home movies, the elder Dickinson's judicious mentoring of his offspring reaffirms loyalty to tradition, and has its foundation in the family.

Equally precocious and prescient, the North Mississippi Allstars exhibits plenty of foresight to preserve this history of itself and the music (and musicians) so deeply respected. Hopefully Do It Like We Used to Do is but the first installment of a series that remains as steeped in scholarship as it is in joie de vivre.