Maximize your visibility at All About Jazz by upgrading your musician page from standard to premium. With it, you'll receive All About Jazz home page exposure, a highly stylized / ad-free musician page with bonus features and benefits, an ad, plus you control where you sell your music and so much more.
Learn More
340 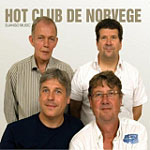 Gypsy jazz is hip again, with Hot Clubs springing up from Detroit to Cowtown. So in a world full of Django Reinhardt idolizers, how does Oslo's Hot Club de Norvege stack up? Suffice it to say that Svein Aarbostad (bass), Jon Larsen (guitar) and Per Frydenlund (guitar)—who have been friends since childhood—have been working on this music for 30 years now, and they know how to make their strings swing.

Django Music also features the impressive Finn Hauge on violin and harmonica. He and Larsen—in the roles of Stephane Grappelli and Reinhardt, respectively—take most of the solos, though the entire quartet brings finger-popping technique to music that is fast and fun. The quartet's take on "Nuages" has the laid-back intensity of a romantic daydream, with Larsen's guitar sending flurries of notes past Hauge's rising violin lines. "Karius & Baktus" builds from sadness to a dizzying intensity, driven on by an exceptional violin solo and an entertaining dialogue of trading with the guitar before the head returns. "Joseph, Joseph" is a joyous, up-tempo burner that features more fiery violin work from Hauge, and a solid Aarbostad solo.

Frydenlund's rhythm guitar is solid across the range of feels and tempos the group explores. The lone vocal he takes, on the opening "I Can't Give You," is off-key but brief. His mellow "Echo" opens with interplay between guitar and violin, followed by a heartfelt yet still dizzying solo from Larsen, and wonderful, lilting harmonica work by Hauge. Larsen's mix of technical and rhythmic invention is truly dazzling. His sound manages to mix the grace of classical music with the cry of the blues. "Blue Drag," for instance, features lines that twang with soul, and then cascade in rapid streams of notes.

In addition to classic Django standards such as "Nuages," "Tears," and "Swing 42," there is a selection of originals and takes on traditional melodies that the original Hot Club would have envied. Along the way, the album manages to explore the full emotional range of this music, which swings with a passion, even through moments of darkness. Most of all, these guys have fun with what they do, as the album's closer—a traditional "Danse Norvegienne"—bears out. While the tune opens with a distinct folk sound that is like nothing else on the album, it promptly reforms in the Gypsy jazz mold. And while the violin continues to pull from the Norwegian theme until the end, the other musicians proceed along with the easy swing of the original Hot Club.

Here's proof that Django music sounds good no matter where or when it's from.