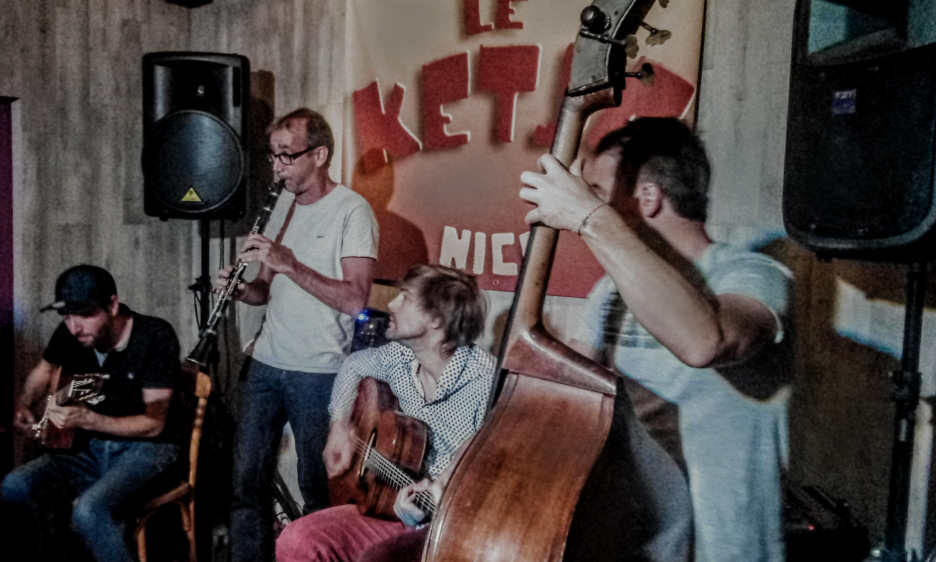 Manouche or Gypsy Jazz started when Django Reinhardt first heard American jazz musicians in France during the interwar years. Django blended gypsy tunes and his compositions with Swing rhythm. In Paris his music reached a zenith in the Hot Club of France quintet which Django led with violinist Stephane Grappelli.

Le Ketje (Belgian slang for Street Kid) is a double fronted bar near to the Acropolis conference center in Nice, France. Owner Thierry was an electric bass player touring with a hard rock band for years. That makes Ketje a musician's hangout. Thierry now runs his wine and beer bar from behind the traditional zinc countertop. At the back of the bar, supported by 2ft thick exposed stone walls, is a cave-like performance space which fills with locals on weekends—those who can't get in spill out onto sidewalk tables.

The Djala Michto Quartet (it's a gypsy greeting— All goes well?) were already set up on the low stage area. The quartet plays jazz festivals and venues all along the Côte d'Azur from Monte Carlo to Cannes. Two guitars carried the Django sound, lead Nicolas Saibene and on rhythm Paulin Lahaye. On the stand-up bass was Fred LaCroix, with excellent clarinet from Fred Portal. Coming from a variety of different musical backgrounds, the group has been playing together for more than 15 years.

They set off with the 1928 standard "I Can't Give You Anything but Love, Baby" with Portal leading the way on clarinet. Saibene took over playing lead guitar, which was built for him by Lionel Rouvier, a luthier in Draguignan, about 50 miles away. The quartet went on with another standard "Oh, Lady be Good," written by the Gershwin brothers in 1924. The clarinet was spirited and bright, the lead guitar sounded less clear, however, the notes were being picked cleanly in the Gypsy rest stroke style, which should give a hard punched note. Through the whole evening, the all-important swing from the Pompe style of Lahaye kept the music moving along at a good clip. They played their composition "Julliet" next, then into the long notes of Duke Ellington's "Caravan" from 1936. They closed out the first set with Django's "Minor Swing."

The second set opened with "On the Sunny Side of the Street" from 1930 and went on with standards and a few quartet compositions which they did not announce. For the big finish, they turned to the Russian folksong "Ochi Chernye" (Dark eyes) with the audience clapping along and dancing as they accelerated faster and faster to a long and cheering ovation.

This was not a grand concert hall performance, but it was played well to an appreciative audience. Small venues keep audience interest in jazz alive.