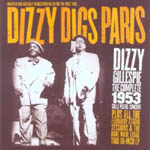 If indeed Dizzy did dig Paris, then the opposite was also true, and the Parisians who were at the Salle Pleyel in February of 1953 made that abundantly obvious in their responses to the music.

They knew what it was all about. They were witnessing one of the greats in any field of music, the yin to Charlie Parker's yang and without a doubt one of the few creative people in any field to make revolution sound not only like the most natural thing in the world, but also one of the most entertaining.

That's enough in itself, but there's more. It's in his work on "Birk's Works that Dizzy proves he could have been the most distinctive swing trumpeter there ever was, had he not had such a restless spirit. Similarly, the clarity of his trumpet tone in stating the theme of "They Can't Take That Away From Me" offers evidence of what Clifford Brown might have got from him, and in his solo on the same piece, he offers up evidence of how much of a break he was with the way things had been.

"Tin Tin Deo still stands as testament to how sophisticated his rhythmic sense was, especially when it's played as here in sequence with "On The Sunny Side Of The Street, where it's clear also how comfortable he was with the kind of grandstanding he invalidated simply by shifting the musical goal posts.

There are a couple of generously timed discs in this set, and the second of them finds Gillespie and his men in the Studio Pathe Magellan laying down the kind of music that many would aspire to, but few could attain. If anything, pianist Wade Legge emerges here as a more interesting player. While his style as an accompanist bears some resemblance to Lennie Tristano's, as a soloist on the likes of "The Way You Look Tonight" he betrays no overt stylistic influence. This impression is borne out on the trio sides of a 10" LP that have been added here. On "Perdido he is his own man, while on "Dance Of The Infidels" he is no small distance from composer Bud Powell's reading of the same piece.

This body of music provokes a rhetorical question. Is the word "essential" overused? If it is, it makes no difference, because it's the right word for what we've got here.

CD1: Intro; The Champ; Good Bait; Swing Low, Sweet Cadillac; I Don't Stand A Ghost Of A Chance With You; Lady Be Good; Mon Homme; (I've Got) The Bluest Blue; Birk's Works; Ooh-Shoo-Be-Doo-Be; They Can't Take That Away From Me; Embraceable You; Play Fiddle Play; I Can't Get Started; Tin Tin Deo; On The Sunny Side Of The Street. CD2: School Days; Undecided; The Way You Look Tonight; Always; Mon Homme; Clappin' Rhythm; Fais Gaffe (Watch Out); Moon Nocturne; This Is The Way; S'Wonderful; Oo-Bla-Dee; Stormy Weather; Jalousie; The Very Thought Of You; Fine And Dandy; I've Got You Under My Skin; Pennies From Heaven; Perdido; Dream A Little Dream Of Me; Wade Legge's Blues; A Swedish Folk Song; Dance Of The Infidels; Aren't You Glad You're You?; These Foolish Things; Why Don't You Believe Me?