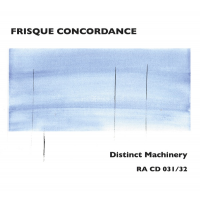 The group Frisque Concordance began back in October 1992 when the quartet—comprising UK saxophonist John Butcher and the Germans pianist Georg Graewe, double bassist Hans Schneider and drummer Martin Blume—was recorded live at the Ruhr Jazz Festival in Bochum, Germany. The results were released in 1993 as Spellings, the first album on Graewe's Random Acoustics label.

Although Butcher and Graewe recorded one album as a duo, Light's View (Nuscope, 1999), Spellings represented the entire Frisque Concordance story until the release of the album Distinct Machinery in 2021, twenty-eight years later. While bearing the same name as the 1992 group, the personnel had altered somewhat, with Butcher and Graewe remaining but now being joined by Dutch bassist Wilbert de Joode and UK drummer Mark Sanders, both of whom had past experience playing with the saxophonist and pianist as well as with each other. The fact that Butcher and Graewe have been the heart of the group in both incarnations emphasises that they are the primary focus of its music, with one, other or both playing throughout.

Distinct Machinery is a double album with one disc that was studio-recorded in Vienna in March 2017 and another recorded live during Konfrontationen in Nickelsdorf in July 2018, a total of ninety- six minutes of music. Despite sixteen months and about forty miles between the recordings on the two discs, the studio and live recordings are compatible and work well together. This is best illustrated by the tracks "Hot and Cold" and "Cold and Hot" on the studio and live recordings respectively; played back-to-back, the mood and sound of the two are remarkably similar, with none of the four players dominating but all of them contributing to the ebb and flow of these balanced group improvisations.

In other respects, there are significant differences between the studio and live recordings. The studio-recorded disc features ten tracks, six of which play for under four minutes, whereas, apart from "Cold and Hot," the live recording comprises three tracks, "Desmodromics I-III," which total forty-five minutes and represent the group's set, complete with solos as well as extended ensemble passages in which all four interact and stretch out together. Taken together, the entire album reaffirms Frisque Concordance as a well-integrated, empathetic improvising ensemble. On the basis of the music here, the most appropriate reaction is to welcome the group back and urge them not to leave it another twenty-eight years until their next album.