BY BRUCE LINDSAY
September 26, 2011
Sign in to view read count 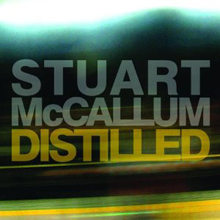 Distilled is a beautifully atmospheric recording, the third album from Stuart McCallum, best known for his work with the Cinematic Orchestra. The Manchester-based guitarist/composer knows how to combine established and contemporary sounds, making them into music that is never less than fascinating and, at its best, a thing of breathtaking beauty.

Much of the beauty of this album comes from McCallum's ability to blend instruments together to form a sound that is both cooperative and undifferentiated—a process based on cycles of composition, recording and sampling. This is not music that thrives on competition or contrast, but on graceful interaction, on sharing of ideas and musical spaces. McCallum intermingles the different instruments, samples and technologies with genuine creativity. Each instrument is crucial to the overall sound—not by retaining its own sonic identity, but by adding another layer to the carefully crafted whole.

In the wrong hands, the result of these multiple layers of sound might be bland in the extreme. But McCullum effortlessly transcends the wishy-washy, often through the simple strategy of retaining the distinctive sound of a single instrument and setting it above the others. On "dR Doctor" his guitar sound retains a tight metallic edge that contrasts with the flowing wave of sound created by the other players. On "Distilled" it's Dave Walsh's punchy drums that deliver a lively groove over the hypnotic feel of the melody; on "Fokey Dokey," Rachael Gladwin's harp somehow sounds both comfortingly traditional and futuristically space-age at the same time. "Hillcrest Part II" features some of McCullum's loveliest guitar playing, with crystal clear single-note runs and bright, sparkling repetitive phrases.

With its sampled strings, Mullarkey's rich double-bass and yet more of McCallum's sparkling guitar, "La Cigale" is Distilled's most grandly ambitious tune. But it's just one of many highlights on an album filled with evocative melodies and insistent rhythms. This is jazz for fans of electronica, and electronica for jazz fans, but most importantly, music for people who love music.