By DEREK TAYLOR
October 1, 2001
Sign in to view read count 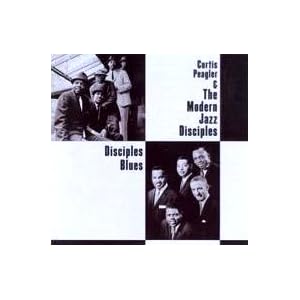 Discs like this one are among the most fascinating and enjoyable in the voluminous Fantasy jazz oeuvre; artifacts from forgotten groups who were left by the wayside of popular notice, not because of any absence of talent or creativity, but simply because they surfaced during a time when jazz was rife with staggering amounts of both. In an era when more modern jazz giants walked the earth and were actively recording than at any other time it must have a sobering prospect for fledgling groups like this one to find an audience. Last year’s reissue of New Jazz Frontiers From Washington (Riverside) by the JFK Quintet, a D.C.-based collective discovered by Cannonball Adderly that met a fate similar to that of the Modern Jazz Disciples, is another example of this historical phenomenon. If not for the astute ears and assiduous advocacy of established players like Adderly (and in the case of the Disciples, Eddie “Lockjaw” Davis), these groups almost certainly wouldn’t have even been given the chance to record. Fortunately for 21st century jazz fans they were.

Hailing from Cincinnati, the Disciples, under the erstwhile leadership of Peagler cut a pair of platters for the New Jazz subsidiary of Prestige. Their music centers in the bop-inflected style popular during the early 1960s, but with the rhythm section taking a more active role in close confluence with the frontline horns. William Kelley’s normaphone (a valve trombone in the guise of an alto saxophone) gives the band an air of eccentricity on paper, but his playing follows the hard bop path of his partners. He also hoists the ungainly, but soothing toned euphonium for one number, the Charlie Parker-penned “Perhaps.” Bird’s influence is actually all over Peagler’s phrasing and tone, but the young saxophonist does much more than simply ape his idol, evidencing an advanced harmonic sense along with a blues imbued soulfulness. The band’s choice to adopt the Gene Ammons blowing staple “The Happy Blues” showcases another exponent of their collective sound, one of easygoing swing. Brown is the third point in the triangle of principal solosists and his agile touch on the ivories keeps the blues focus of the group from ever sounding gloomy, even on somber tracks like “My Funny Valentine.”

Each of the pieces on either date has its charms and it’s a true shame the Disciples weren’t able to garner further dates on the strengths of these first two. According to the liners Peagler went on to work as a sideman for Ray Charles and Count Basie. The fates of his band mates aren’t disclosed. Listening to this disc and others like it in the Fantasy catalog always conjures the same tantalizing question in my mind. What other albums from long abandoned ensembles lie in wait for reissue and when will they once again see the light of day?

Prestige on the web: http://www.fantasyjazz.com