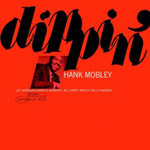 Hank Mobley spent most of 1964 banged up for drug offences. The year of the Beatles' US breakthrough, which sounded the final death knell for hard bop as a mainline music of inner city youth, happened beyond Mobley's eyes and ears. Is it too fanciful to suppose he barely noticed it happening?

Probably yes. But it would explain the headlong vigour and take-no-prisoners confidence of 1965's Dippin'. The album starts with an explosive, declarative drum roll from Billy Higgins before charging straight into the sanctified up-tempo funk of "The Dip," and thereafter only cools the temperature once, for the porcelain ballad "I See Your Face Before Me."

The core of the album is four blues-based Mobley originals. The stone killer is the almost-title track, "The Dip," its torrid, down-home main theme set off by a catchy, almost Brill Building, bridge with some clever harmonic inventions. The tune launches hot and lyrical solos from Mobley and Lee Morgan, over righteous two-handed vamping from Harold Mabern, Jr., echoing Barry Harris' work on Morgan's "The Sidewinder."

Djalma Ferreiro's "Recado Bossa Nova," which follows, is almost as good. The tune, an up-tempo samba—which had been introduced to jazz audiences by Zoot Sims in 1962, during the early days of the bossa nova craze—sounds attractively anachronistic today, and it's easy to imagine it as the theme song to some European rom com of the time, probably featuring Audrey Hepburn and set amongst the moneyed elite on the French Riviera. Mobley and Morgan again deliver top drawer solos in which funk coexists comfortably with melodic invention.

"The Break Through" and "The Vamp" are good too, but a shade paler by comparison (although on the latter, Mabern and Higgins generate some interesting conversational heat between them). Schwartz and Deitz's pretty "I See Your Face Before Me" includes a lovely muted trumpet solo (from which Morgan, happily, is unable totally to expunge his blues retentions). "Ballin'," which closes, is standard-issue fast hard bop, fun but hardly memorable.

Dippin' isn't one of Mobley's all-time greatest albums, but a solid one with a couple of fist-sized gold nuggets, and here in a deserved RVG remaster edition.

The Dip; Recado Bossa Nova; The Break Through; The Vamp; I See Your Face Before Me; Ballin'.