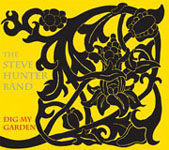 If Chick Corea's Return to Forever had stayed closer to the Latin and Spanish roots of Light as a Feather (Polydor, 1972) while turning somewhat more electric rather than being completely plugged in, it might have sounded something like Steve Hunter's Dig My Garden. The year the Australian bassist spent living in Spain has only further cemented an already deep-seated interest in the country's rich musical heritage, but with a quartet of fellow Australians whose roots extend far and wide, The Steve Hunter Band manages to be referential without being imitative.

Nor does Dig My Garden directly emulate RTF. While Hunter is an undeniably virtuosic talent alongside his band mates—pianist/organist Matt McMahon, drummer/percussionist James Hauptmann and guitarist James Muller—The Steve Hunter Band avoids falling into the trappings of excess, where it's more about the chops than the music. "Savvy, with McMahon's Rhodes and Muller's overdriven guitar tone, meshes a Latin groove with a more rambunctious vibe, while the ambience of the "The Lemon Bird occupies a similar space as Chick Corea's flamenco-centric Touchstone band and Rhumba Flemenco (Chick Corea, 2005), especially with Hunter's out front mix of melodic and flamenco-informed playing, Hauptmann's cajon and Muller's acoustic guitar.

As ever, Muller is a chameleon-like player who seems to fit into any context, whether it's the vivacious Jazzgroove Mothership Orchestra and its Dream Wheel (Birdland, 2007), his own more open-ended trio date Kaboom (Birdland, 2006), or waxing Holdsworthian on drummer Chad Wackerman's Legs Eleven (Independent, 2004). On the insistently groove and largely vamp-based "Trellis, the guitarist's gritty tone and combination of outré legato runs, visceral bends and sharp accents are further evidence of a remarkable guitarist who remains undervalued outside his own country, but deserves far greater acclaim. McMahon's acoustic piano solo, supported by organ washes, is no less impressive, while Hunter's robust tone anchors the piece alongside Hauptmann's simple pulse that keeps things moving with a vibe reminiscent of Miles Davis' In a Silent Way (Columbia, 1969).

While not as orchestrally rich as Weather Report, and more rhythmically direct, "The Empty Chair has some precedence in the late Joe Zawinul's fusion group—another case where the music mattered more than the inestimable talents of its members. Still, Hunter's solo on this balladic track is an album high point and, for a group led by a bassist, surprisingly one of only a few solo spots on the disc. That said, his a capella bass solo, "Poema del Bajo is an atmospheric, flamenco-tinged miniature, demonstrating harmonic depth and compositional focus.

Hunter's no newcomer, an active member of the Australian since the mid-1980s, but if Dig My Garden is a first encounter with this talented bassist/composer, it's an attention-grabbing one that clearly suggests there are many rewards waiting in the rest of his discography.