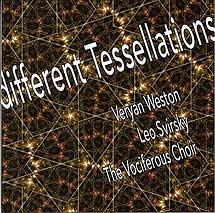 Different Tesselations must be considered as a companion piece to Tesselations for Luthéal Piano (Emanem 2003), the album on which Veryan Weston debuted his sequence of 52 closely linked pentatonic scales in a piece he called "Tesselations"—so named, he said, because it "contains structures which have, by coincidence, similarities with some of the principles of geometric tessellations." For the 2003 album, Weston recorded five pieces, each of which utilized from six to fourteen of the scales. He recorded the pieces in the Musical Instruments Museum in Brussels, playing the only surviving Lutheréal piano.

Different Tesselations lives up to its title in that it is very different to its predecessor. It is an album of two contrasting halves, the first played solo on piano, the second sung by a nine-member choir. Weston is credited as composer but as a performer he only appears as a member of the choir. The album opens with four solo piano pieces from "Tesselations" (here renamed "Tesselations I") played by 21-year-old by pianist Leo Svirsky, who is based in The Hague, Holland. The sleeve note stresses that Svirsky's interpretation of "Tesselations" is very much his own and so he becomes co-composer.

In contrast to Weston's previously recorded version, Svirsky's interpretation employs from five to nine of the scales. Comparison between Weston's and Svirsky's recordings are further complicated by the instruments they used; where Weston used the unique sound of the Lutheréal piano, Svirsky was recorded playing the more run-of-the-mill house piano at the Vortex jazz club in London. The main similarity between the versions is that they both make it sound through-composed with little obvious improvisatory material. On balance, Weston's version is just preferable, mainly because of his use of that Luthéal Piano.

The second half of Different Tesselations consists of a new piece, "Tesselations II," employing the same set of scales. It is performed by The Vociferous Choir which premiered the piece in early 2010 in Austria; the majority of the choir's members are Austrian plus one Serb, one Armenian and Weston himself from England. With no text or narrative, the singing mainly consists of the type of wordless vocal sounds common in scat singing. Typically, the singing consists of layers of harmonies and overlapping lines, with a succession of soloists taking the lead—mostly these solo contributions are vocal, but on the closing track, "Third Part," Weston and Franz Schmuck perform an impressive nose flute duet. The point of comparison that immediately springs to mind on hearing the piece is the recent work of Bobby McFerrin with his vocal ensembles on compositions such as Circlesongs and VOCAbuLarieS; "Tesselations II" conveys the same spirit of playfulness and freedom as McFerrin does, the kind of joyful sound that encourages listeners to spontaneously join in.

While the vocal composition undoubtedly steals the album, taken as a whole the music on Different Tesselations again demonstrates the potential of Weston's pentatonic scales as sources of compositions. Further developments can, most certainly, be expected from these Tesselations.