By DOUG COLLETTE
February 21, 2015
Sign in to view read count 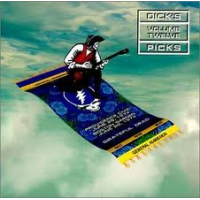 Comprised of recordings in Providence RI and Boston MA from June of 1974, fairly early on in the Grateful Dead's use of their now legendary "Wall of Sound," Dick's Picks Vol. 12 documents a point in the iconic band's evolution where the pendulum of improvisation was swinging back toward more open-ended playing after the more structured approach they took at the turn of the decade, documented in the studio recordings of Workingman's Dead (Warner Bros., 1970) and American Beauty (Warner Bros., 1970). This package finds the Dead not just stretching out on their own compositions, but gleefully and courageously traversing open space.

It is appropriate then, on a couple fronts, that this three-disc set concludes a near thirty minutes of untitled jam immediately preceded by a quarter hour of rhythm guitarist Bob Weir's "Weather Report Suite." A selection from the previous year's Wake of the Flood (Grateful Dead Records, 1973), this multipart piece bogged down the track sequencing on the studio set, but as it appears here, proves a versatile vehicle upon which to jam; little surprise it leads directly into free playing the likes of which this particular lineup excels, in large measure because single drummer Bill Kreutzmann is such an alert and nimble timekeeper.

Such effective contrasts are present on the first two discs as well, and in similar forms. The first CD, in fact, has three such spontaneous pieces, one that actually begins the performance as included here and two juxtaposed tracks labeled "jams," including one predicated on "(That's It for) The Other One," the other a fluid piece that receives the title of "Spanish Jam." Set and show closers "Truckin'" and "Sugar Magnolia" supply informal introductions to and progressions from the aforementioned jams, while "Wharf Rat" supplies its usually dramatic denouement. "Me and My Uncle" and "Big River" are short sweet shots of concise dynamics and "Eyes of the World" effectively unites the the mindsets of song structure and instrumental serendipity.

More detail on the sources of these recordings would benefit these reissues, which are packaged identical to their prior independent versions, but there's as much logic in preserving the original packaging as that of eschewing any additional sonic upgrade: engineer Jeffrey Norman's HDCD mastering maximizes the clarity of Bill "Kidd" Candelario's recording. In fact, the concept of Dick's Pick's Vol. 12 clearly delineates curator Dick Latvala's expertise in compiling such titles; while many if not most of his selections were complete shows, this one is not, but nevertheless functions like one—proof positive of the plethora of worthwhile material in the Grateful Dead vaults, but also the late archivist's ear for the group's music.