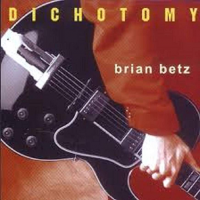 Betz's guitar shows no overt stylistic influence, though his slightly oblique feel for harmony might put some listeners in mind of Jim Hall; this is best exemplified by his solo reading of Billy Strayhorn's "Chelsea Bridge." His innate feel for that composer's sometimes melancholy moods is joy for the ears.

Drummer Jim Miller can sometimes be a little off-putting, not least on "Cohabitation," which storms a few barns by way of opening the disc. The feeling of perpetual motion that Miller is presumably aiming for here is a difficult thing to attain, and it's an entirely subjective matter whether or not he achieves it here.

Elsewhere, however, he proves he knows the meaning of subtlety, as on Betz's own "The Twenty-Second Day," where the leader proves that he and his cohorts have the late-night thing down to a fine art; Betz's work is lyrical at the same time as it hints at all sorts of harmonic possibilities.

Such is the level of cohesion throughout this date that one must assume this is a working band. The only other option is that the players were granted an unusual amount of studio time in preparation. Whatever the case, the outcome is music that on one level is agreeable background, but on another has substance enough to reward closer and repeated listening. More specifically, lovers of jazz guitar played in the idiom of the sometimes pervasive-seeming post bop mainstream will find much to enjoy here.

Cohabitation; Dichotomy; This Way To The Cape; The Shadow Of Your Smile; Chelsea Bridge; You Stepped Out Of A Dream; The Twenty-Second Day; Razor Sharp (for Denny); Carrot Cake; Multicoloured.