By John Sharpe
September 1, 2019
Sign in to view read count 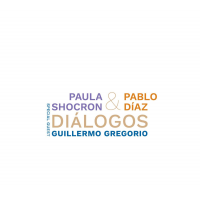 Argentinian pianist Paula Shocron and drummer Pablo Díaz have already reached out to embrace like-minded spirits in New York, including bassist William Parker on Emptying The Self (NendoDango Records, 2017), and multi-instrumentalist Daniel Carter on Co-operative Sound #2 (NendoDango Records, 2017). They similarly returned to New York to record Diálogos, but this time they sought out their countryman clarinetist Guillermo Gregorio, who relocated to the US many years before. Together they inscribe a series of miniatures where atmosphere and timbral coloration are predominant, very different from earlier outings such as the mesmeric piano trio which waxed Tensegridad (Hatology, 2017).

Only three of the fourteen spontaneously-generated cuts exceed the four-minute mark. Paradoxically, Díaz majors on clatter, tap and scuff without engendering momentum, while Shocron's chiming keystrikes are often the source of what rhythmic input there is. Happily, with his coolly abstract clarinet, Gregorio acts as the unifying figure relating to both. He shows his command of his instrument by effortlessly echoing some of Díaz' textures such as the scraping sound on "Perspectiva Axonométrica," which adds to the cohesion, while his unspooling lines also intertwine with Shocron on occasion. On "Inwood-Brooklyn 4 Hs.," one of the longest tracks at over six minutes and one of the highlights, their mercurial interplay attains its fullest expression.

Some of the pieces are grouped under collective titles which reflect their character. The four "Diálogos" are among the most interactive, while the four "Micromatismos" tend more to percussive-led exercises in tone. For the most part, Shocron is controlled and restrained, often concentrating on tinkling single notes at an unhurried pace. She is at her most distinctive when she breaks into loosely flowing classically-tinged exchanges with Gregorio, as she does on the two "Arias." Among other high points are the final two cuts, where Shocron's left hand goes on excursions into the bass register which contrast pleasingly with Gregorio's chirruping squiggles on "Micromatismos Nro. 4," and initial growls before taking flight on "Sounds Brewing," where Díaz effectively suggests movement.

The overall result is an enjoyable outing as full of sensitive ensemble playing as the title implies.