By Dan McClenaghan
April 8, 2018
Sign in to view read count 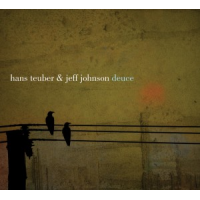 Bassist Jeff Johnson's first recording for Seattle's Origin Records was 1999's Free. Saxophonist Hans Teuber was there, and he was there on Johnson's subsequent Origin outings: The Art Of Falling (2001), Near Earth (2004), and Suitcase (2011). It's a relationship that has made beautiful music—mysterious and oddly sacred sounds that exude a smooth-flowing timelessness. All of these were trio or quartet affairs. Now Teuber and Johnson take the ultimate test of compatibility, with their duo recording, Deuce

The pair's artistry has always displayed a free-roaming coolness. That doesn't change here. Half of the tune-smithing on the set is attributed to Teurber/Johnson, including the mystical opener, "When I'm In The Sky." These are introspective, gorgeous wanderers, floating around with no direction home. "Let's Pretend" begins with a bass drone, giving the music an eastern tinge."Hot Rod" has more momentum, but it's a ride that rolls just beneath the speed limit, on a steady cruise control, showcasing Heuber's always beautiful tone and Johnson's muscular backdrops.

The unusual—for a couple of "free" guys—choices in covers adds another layer to the element of surprise: a lugubrious take on bluesman Jimmy Reed's "Bright Lights, Big City," a levitating, slightly ramped-up rendition of the standard "What's New?" And Irving Berlin's "How Deep Is The Ocean," brings saxophonist Lee Konitz' elastic versions of this gem to mind; and the closer, "You've Changed," from the Great American Songbook, features Johnson's powerful yet-pensive bass solo and Teuber's deft and delicate touch with the melody, to close out yet another superb recording by the Teuber and Johnson teaming.