By EDWARD BLANCO
January 8, 2021
Sign in to view read count 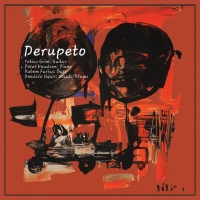 Hailing from Linkoping, Sweden, Gothenburg-based Jazz guitarist Tobias Grim and his new eclectic quartet offer an exciting musical statement on their brash debut, Derupeto. On tap here is a highly energetic production showcasing elements of African, Brazilian, American and Swedish influences on a nine-piece album of fresh new originals from the band resulting in a contemporary and unforgettable jazz sound.

The guitarist would not have been able to accomplish the magic on this new outing without the help of his international cast of players. The Derupeto quartet includes fellow Swede Peter Knudsen on piano, Brazilian Ruben Farias on bass and Deodato Siquir, from the Republic of Mozambique, on the drums and vocals.

The Grim original "Bahia" opens up the music with the leader on acoustic guitar and Siquir providing the vocals and cymbal splashes on an upbeat barn burner of tune that is an impressive introduction for what's to come. The composition from the leader and Marcia de Souza, "Brazil Lines," features Portuguese lyrics voiced by Siquir on an light Brazilian-tinged number where the pianist delivers his most pronounced solos of the set.

Most likely a tribute piece to 84-year-old guitarist Joe Diorio, the tune "Diorio" features Grim on the electric guitar delivering sonic riffs supported by Knudsen's handy keyboard work on perhaps the finest piece of the session. The pianist's original "Vanessas Vals," is introduced with delicate, gentle lines from Knudsen on a deliciously light ballad designed for the warm side of the heart.

The fiery and wild influence comes through on the funky flavored "Funk do Misterio" where the percussive and swing undertones carry the day on this track highlighting the band clearly having some fun with the tune. The following "Tid" displays an altogether different sound, more melancholy, more subdued yet colorful and pleasant on melody.

Ending the session as it began, the group plays with engaging energy on the Siquir original "No Bar," displaying the drummer's chops, well supported by his bandmates, leading to the finale, the funk-driven "Lifeline," where the bassist and leader lend their talents with delightful contributions helping to put an exclamation point to the set.

Performing with a cohesion of a band that's been together for decades, this recently-formed Derupeto plays like a band of brothers, evidenced by the superb music on this self-titled debut. Let's hope Grim and group continue their collaboration for a sequel recording.