BY CHUCK ANDERSON
August 29, 2010
Sign in to view read count 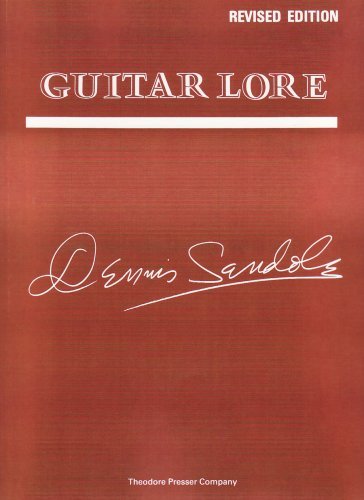 Guitar Lore by Dennis Sandole was not originally published by Theodore Presser. I published the book and distributed it through my school Modern Music Studios Inc. A second edition paperback was published later by Pressers.

There has always been controversy about the origins of the book. Dennis had conceived and organized this material long before it was published. At my urging (and I'm sure the urgings of others), he finally agreed to proceed with the production of the book. I took dictation and the outlines of the book directly from Dennis and then hand wrote and developed the entire manuscript.

The original copy of Guitar Lore was black and had steel spiral bindings. There were only 1,000 copies of that edition made so if you can find one, it's a collectors item.

The material was essentially a compendium of techniques considered essential for the virtuoso guitarist. It first covered left hand position and then right hand pick hold and stroke. Contrary to popular opinion, it did not advocate strict alternate picking nor a "stiff wrist" picking technique.

Topics covered were the development of a system of "jazz" chords, chord scales, rhythm studies, sequences both diatonic and chromatic, arpeggios through extensions, scale fingerings in multiple octaves, interval studies, exotic scales, and technical studies of all different types including double stops. This was in essence a technique book—not so much mechanical but musical technique. Of course, all technique must have a musical aspect to it or it won't be applicable to the "real" world.

The book did not deal directly with improvisation, melody and chords or repertoire.

There was to be a follow up to this book called Scale Lore but it was never published.

Chuck Anderson The Art and Science of Jazz United States