By GLENN ASTARITA
November 1, 2017
Sign in to view read count 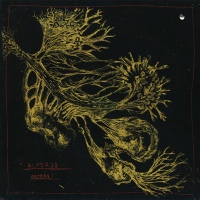 The two extended tracks on this album generate enough excitement to offset the 28-minute album length that reverts into the extended play category. Here, the Portuguese trio's second album surfaces as a futuristic primordial endeavor, featuring the musicians background chants to perhaps a higher being along with cyclical African pulses, EFX and bizarre sojourns into the netherworld. Hence, the press release blurb references Alforjs' sound or modality to the experimental krautrock ensemble Can, but saxophonist Mestre André's explosive free-form lines on "Abajo," summon notions of Albert Ayler.

The trio opens with the highly rhythmic "Ajiba," which surfaces like a spaced-out tribal groove with eerie inferences and thrusting powerplays. The musicians impart a shadowy soundstage, yet drummer Raphael Soares' reverberating Afro-beat patterns infuse a regenerating pulse that supplements André's forceful phrasings and bassist Bernardo Álvares' thunderous lines. And while the second track serves as a brief intermission, the final piece "Abajo" is where the trio soars into free-jazz terrain. It's another opus that pushes the envelope, complete with the saxophonist's serrated notes, as he also seems enveloped by a trance-like aura. Whereas, the band's voice overlays, crashing drums and supple bass parts, conjure a fatalistic plot amid a raw sound with unbridled momentum. Essentially, they wreak havoc on your neural network via an ominously crafted musical agenda.

At times the short duration of this album appears as a teaser, as if more is on the way. But their capabilities and force-field like progressions intimate gobs of dynamics, presented with the utmost gusto.