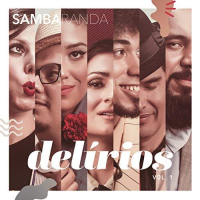 Sambaranda is an cappella group out of Sao Paulo, Brazil that melds a delicious tropical flavor with the very best of vocal jazz. Their first release was a Christmas album in November 2017. Although their second, Delirios Vol. 1, came out in July of 2017, it only recently arrived here, thanks to a copy sent from a friend in Sao Paulo. This was a lucky event, since there seems to be no publicist in sight (yet!).

On Delirios Vol. 1, seven attractive young people offer an appealing variety of tunes, tempi, and local musical heroes in a superb musical blend. Their web site includes fully justified rave reviews from members of Take 6 as well as note of their 2017 win for Best Vocal Jazz Album (a cappella). There are ten tracks here: works by Antonio Carlos Jobim and Vinicius de Moraes, Ed Motta, Djavan, Guinga, Dominguinho and Marisa Monte, and Gilberto Gil, all done short and sweet—the longest is about four-and-a-half minutes long. When more familiar tunes are included ("Wave," "Agua de Beber") Sambaranda gives them a fresh spin by playing with the time. The excellent arrangements are by Rafael Carneiro, who also wrote the last, joyful selection, "Na Varanda."

This terrific CD is subtitled "Volume 1," and it's likely that those who hear it will be eagerly anticipating Volume 2.

It should also be noted that Sambaranda has a generous presence on You Tube. Their latest video—"Vinho de Ponta/Ponta de Areia"—was filmed on a Sao Paulo rooftop at sunset, with the sole accompaniment of a finger tracing the rim of a wine glass. The mood is dreamy and nearly transcendent, a rare pleasure to watch and hear.