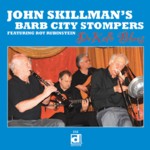 The Barb City Stompers is a trad through swing band that was formed in 2004 but the pedigree of some of the players goes back well beyond that date. Clarinetist John Skillman has been a member of the Buck Creek Jazz Band for thirty one years, for example, while Roy Rubinstein has offset his career as a physicist with over fifty years of trombone playing. In fact with the exception of drummer Aaron Puckett the whole band has pursued careers outside of music. Maybe it's that factor that makes their music a product of love and devotion.

There's no doubting that they know their stuff nor that they have something personal to say. That's no mean feat given the age of a lot of the material here. As a soloist Rubinstein simply oozes character and the fact that the group has no cornet/trumpet lead in fact affords both him and Skillman space to do their own things. This freedom is demonstrated on "Martha Too." The brief duet between Skillman and guitarist Larry Rutan affords the leader the chance to show off his individual sound and instrumental conception.

"Sweet Sue" might be nothing if not venerable but again the rendition is fresh enough to still all thoughts of hackneyed repertoire and put a smile on the face. Indeed the very informality of proceedings, suggested by the idea of professional people coming together to make a little music on the side, feeds that informality. These guys play out of love and not simply because they want to score reactionary points.

It's the kind of love worth shouting about too if "Hindustan" is anything to go by. Skillman seems to get a kick out of taking the music every which way, rhythmically speaking, and when he settles into the clarinet's lower middle register he proves himself to be one of the most distinctive players working in this field. Even when muted, Rubinstein turns in some testifying work over backing spritely enough to take the roof off, but with the right measure of restraint to ensure that proceedings don't get hackneyed.

"Old Stack O' Lee Blues" might be as trad as trad gets but again it doesn't matter. This is a band that plays for its own pleasure as much as for that of any paying audience and the chances are that neither they nor the audience ever lose sight of the joyous aspect of this strand of jazz.