By Jim Santella
November 1, 2000
Sign in to view read count 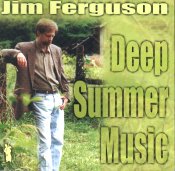 Which season of the year is the most romantic?

Jim Ferguson sings of the romance that exists for all seasons. For his latest album he's selected a program of songs that dig deep; they tug at your heartstrings. Samples may be found at his web site . The session includes standards from Matt Dennis, Rodgers & Hart, Sammy Cahn, Jimmy Van Heusen and Yip Harburg, as well as a handful of Ferguson's originals. These songs represent a romantic spirit for any time of the year.

Henry Mancini's "Slow Hot Wind" reminds the listener of the importance of Nature to romance. Stefan Karlsson and Chris Potter add to that romantic air with impressive lyrical thoughts. On bass, Ferguson contributes a natural rhythm and melody. His approach to the bass, of course, is vocal-like. "In the Wee Small Hours of the Morning" is presented by Ferguson alone: just bass and vocal. The combination works quite well. As the protégé of songwriter-pianist Loonis McGlohon and bassist Red Mitchell, Jim Ferguson has developed a melodic style for both instruments. "Come Home to Red" swings cool to the heart of jazz. Pared down with tenor saxophone and bass alongside his vocal lines, this lively tribute brings out the goose bumps. Ferguson's "Walkin' the Dog" is a humorous look at living together and needing a little space from time to time: the key to a healthy relationship. His inventive "What's a Guy Supposed to Do?" includes a little scat singing, while "Deep Summer Music" settles down with romance and a slow ballad crawl. Whether it's the rainy season, the coldest week of winter, or a torrid heat wave, Jim Ferguson's romantic collection of songs goes right to the heart of good music.

Deep Summer Music; What's a Guy Supposed to Do?; I'll Only Miss Her When I Think of Her; Wait Till You See Her; There'll Be Other Times; Walkin' the Dog; Slow Hot Wind; The Night we Called it a Day; Come Home to Red; Then I'll Be Tired of You; When the Night is Done; Nobody Home; When Your Lover has Gone; In the Wee Small Hours of the Morning.