By Walter Kolosky
August 20, 2006
Sign in to view read count 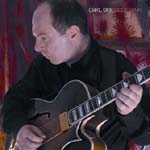 Deep Down is quite a departure for jazz, rock and funk fusioneer Carl Orr. The guitarist has been known to use some pretty heavy-duty distortion and effects over the years, in Billy Cobham's band and his own groups. This outing is an effort to make more with less. Orr eliminates most of the distortion and treble and goes for a purer sound in service of bossa nova, organ-based jazz and some solo pieces.

Recorded over the space of six years, Deep Down opens with the relaxing "Stand Alone. Tasteful and clean single-note runs and warm chords mark Orr's playing on this cut; the calmly swinging organ of Pete Whittaker provides the structure. Christian Brewer's alto sax offers a counter-voice as the tune builds in intensity. Nic Frances' drumming, as throughout the CD, is heavy with nuance. (Yes, "heavy nuance is possible.)

"11th hour, recorded in 1999, is marked by Whittaker's organ shadings and Orr's lightning-fast playing. Its somewhat truncated, but catchy melody is a bit mysterious sounding. Saxophonist Butch Thomas takes a star turn, reaching the upper registers as the tune fades out. "People Power is a spatial excursion underpinned by a steady, yet gentle, militaristic beat. The lead instruments for most of the piece, according to the liner notes, are the saxophones of Brewer and Thomas, though it is hard to tell when one leaves off and the other begins, so seamless is the playing. Orr's reverbed guitar provides space for the tune to land.

The title cut finds Orr in a laid-back bossa nova mode, displaying some of the most expressive chops you're ever likely to hear from an electric guitar. Just down-right beautiful is all I can say. Several heartfelt solo acoustic numbers, dedicated to those Orr loves, follow. They further confirm his stringed virtuosity. Reprises of earlier numbers, some featuring programming, fill out this wonderful creation. In the end, you want to play this disc again.

The relatively unsung Orr's fleet-fingeredness and musical imagination, as evidenced by his confident dexterity and intriguing compositions, put him on one of the top shelves of today's guitar and overall musical elite. If there is any artistic justice at all, it is only a matter of time before many more people reach up and grab that particular book, open the pages and discover what they have been missing.