By Nenad Georgievski
March 27, 2012
Sign in to view read count 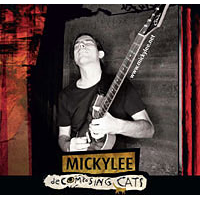 For his debut, guitarist Mickylee teams up with a bunch of excellent players to come up with something that is nothing short of superb. Miroslav Mirosavljev, aka Mickylee, is a Serbian expatriate living and working in Vienna, Austria both as a composer, with chiefly music for theater, and a guitar teacher.

No matter how popular or unpopular the guitar may seem, it is still a widespread instrument continues to inspire a myriad of musicians trying to find their voices and push the boundaries of the instrument. Mickylee is a versatile guitarist with a knack for well-crafted composing that spans various styles. Armed with excellent chops and a clear tone, he takes a well-known format and makes it fresh. Throughout the album the musicians play well, and Lee's voice is never commanding or dominating; a minor flaw, since his guitar speaks for itself. Sounding like a band that has been around the block a few times, Lee picked each member of this fine band for good reason.

More often than not, debut albums serve as fine introductions to the work of inexperienced artists with a potential for greater things. This isn't the case here. The compositions are characterized by maturity, melodicism and tight construction. deComposing Cats opens up with "Are You Ready?," which reveals the leader's taste for rock music, much in the manner of guitarists Eric Johnson or John Petrucci, and Mickylee runs with it. This is the combination that sets the tone further for a record that is spiced with classical and jazz leanings, buoyed by funky grooves. The guitarist is in especially fine form as he plays some blistering leads and solos that are heavy in tone and story- like in form. And while upbeat tracks such as "Are You Ready" and the surging "Micky Lee" deserve all the attention, they are hardly the only highlights. "Water Daughter" is simply brilliant and a standout track, with Lee at his most playful, an approach taken even further by his tight and restless rhythm section. They all push each other and there is a genuine sense of good fun and play.

Often, Mickylee changes musical gear deftly to create different feels and tones. The fiery sound of tracks such as "TADADADA" and "Two Brothers" is tempered by the cool and gentle tones of slower tunes like "Ax-planation," "The Mystical of Danoubius Flow" and the closing "Cosa Nova," where the guitarist's graceful lines and warm tone work well. "On The Mystical of Danoubius Flow" he adds a distinct Mark Knopfler-like country sounds that intersect nicely with its beautiful piano melodies, while "Lets Get Out of here" possesses a light and playfully engaging groove.

deComposing Cats is an interesting and varied record, and there isn't a weak track on it. Even though the guitarist is still maturing, Mickylee transcends genres and is as likely to attract a rock crowd as he is a jazz audience.

Are You Ready?; Micky Lee; 78/79; Count us Out; Two Brothers; The Mystical Tales of Danoubius Flow; Water Daughter; Let’s Get Out of Here; Ax-planation; Ta dad a da; Cosa Nova.