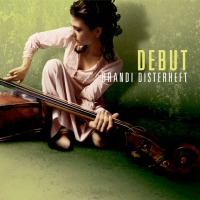 Bassist Brandi Disterheft says that she was inspired by singer Björk to call her first recording Debut. The debt to Björk acknowledged, Disterheft comes into her own and shows why she has been creating a stir.

A native of Vancouver who began playing in her mother's band, Disterheft has come a long way. She has led her own band from the time she was nineteen, has played with top-notch Canadian musicians including saxophonists Mike Murley and Richard Underhill, and has performed at Carnegie Hall with her co-led trio. Now, with this CD, she not only stamps her credentials as a bassist, but shows that she can write some great music. Her ideas make for a fertile plain with detours that make it all the more picturesque and enticing as she grabs the blues, dips into bebop, lays down a cool ballad and even gets in a tune that should have the listener dancing.

Disterheft comes up strong as a bassist. She heralds "Duke's Dead with deep, resonant bowing. The melody is swept into the momentum before it shifts into improvising on the strings and she taps into a churning reservoir of ideas. The quartet outing finds trumpeter Alexander Brown and tenor saxophonist Chris Gale blowing in tandem and getting into the meat of the blues as Sly Juhas rings in the beat with some imaginative drumming.

"Typhoon the 27th Floor provides interesting contrast. It is looser in ambit and also freer in its dimension, giving the musicians plenty of room to interact. Disterheft lays a limber line while Gayle plays with a fiery freedom. Time and impetus shift, quieter times come in and waft on the contemplative interaction between Juhas and Disterheft before Gayle takes the tune out on the melody. "If Only... is a winsome ballad. Pianist David Virelles is lyrical and sets the mood for the warm singing of Sophia Perlman.

Disterheft's debut is testimony to a remarkable talent.