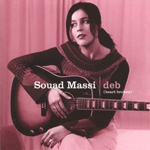 Souad Massi is the kind of singer you just can't help agree with. Deb (Heart Broken) is the Algerian's second release, and it spans quite a range: traditional Arabic melodies, prayer music, Old World romance, Andalusian flamenco, and various folk musics beyond categorization. There's no mistake at any point that depite the accessible pop essence of the record, it draws its strength from folk music. Deb is music of the people, for the people, period.

Interestingly enough, not too much rai here. Massi has a remarkably soulful and lyrical delivery, direct and effective. Her guitar playing is relatively simple and rarely in the forefront, though there are exceptions, as on "Le Bien Et Le Mal (Good And Evil)," where the singer accompanies herself with gently paced arpeggiated chords. Quiet moments like this feel quite personal.

"Ghir Enta (I Only Love You)" delves deep into the Portuguese fado tradition, with simple repeating Old World harmonies, lightly decorated guitar lines, and that essential emphasis on emotion—almost to excess, but not quite there. If you don't get a warm romantic feeling from this tune, you might want to hang it up forever. One minute later, it's a rip-roaring flamenco jam, complete with light, insistent rhythms, vocals in Spanish, and a party atmosphere. Remember, Algeria isn't too far from Andalusia. Souad Massi knows this quite well. And no sense in keeping things separate. Pick out the good parts, mix them up, and serve on a friendly platter, well done.

As with most modern African pop, production plays an essential role. Massi benefits from a consistently thick texture that serves as a platform for her voice, the lead instruments, and layers of drumming. Best I can tell from a scrappy promo copy, Erwin Autrique is the individual who deserves the credit for the effective cushion.

You don't categorize Souad Massi. She won't categorize herself, which is the real reason to check out this record. Her insistent blend of folk styles from five continents is going to surprise anyone, period. It's most certainly a crash course in the many musical tentacles that extend into Algeria. It's not eclectic, it's organic. Dig.