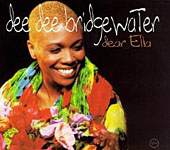 Jazz has many heroes and many legends. The largest of those legends need only one name for identification: Miles, Trane, Sonny, Brownie, Monk, Duke, Pres, and Dizzy to name just a few. Among singers, perhaps only one person's legend is large enough to require only one name: Ella. To attempt a tribute to Ms. Fitzgerald would be a daunting task for any musician, but for a young female singer it would seem a task, and responsibility, too large to handle. This is the task that Dee Dee Bridgewater faced in taking on her latest project for Verve, Dear Ella, and while she notes the fear and anxiety that were her constant companions during the project, the young singer persevered and has produced a disc which is worthy of the legendary subject.

Bridgewater is no stranger to taking on daunting projects—her last album was made up entirely of Ellington material, which she handled well. But attempting to honor perhaps the single greatest female jazz singer ever is an entirely different proposition. Wisely, Bridgewater does not try to sound like Ella, an approach that could only end in failure. Instead, Bridgewater attempts to capture the essence of Ella's touch, her warmth, her playfulness, her grace. Largely, she succeeds as she winds her way through several classics of the Fitzgerald catalog. The album starts off with Ella's biggest early hit, "A-Tisket, A-Tasket" and Bridgewater gives it her own special feel while keeping the playful nature of the song intact. "Oh Lady Be Good," "(I'd Like To Get You On A) Slow Boat To China," and "Cotton Tail" are all highlights, with nice accessible arrangements that allow Bridgewater to seem to enjoy the singing, important for this type of a project when the pressure could leave many singers sounding flat and forced. Bridgewater swings smoothly, scatting in several songs, interplaying with the musicians, and guiding the band through the numbers.

However, even with her strong traditional performances, Bridgewater proves herself a singer who likes unique arrangements on songs like the slower-than-expected "Mack The Knife" and the slightly quick, very groovy approach on "How High The Moon." Throughout, Bridgewater is to be commended for not backing away from any challenges. Several of the numbers here were signature songs for Fitzgerald, and Bridgewater steps up to the mike and gives her all toward making those songs her own, at least for this album. And for the most part, she succeeds. The album does roll along nicely, and Bridgewater's vocals are playful, soulful, and swingin.' She tackles scatting like a hungry lion, sinking her teeth in all the way, gulping it down fully, and allowing all the juices of the song to run down her chin and neck. Scatting, and scatting well, is not for the faint hearted. To do it right, you have to have confidence in your ability to swing. Bridgewater definitely possesses that confidence.

Overall, this disc is a good, pleasant listen for fans of scatting and upbeat big band swing singing. While the theme is a tribute to Ella, don't pick this up expecting to hear her ghost. While Bridgewater is brave enough to take on all this material and the legend of Ella, she is also smart enough to realize there is only one Ella, and that she needs to sing like Dee Dee to be successful. At times, the melodies involved in several of the songs are obscured somewhat by Bridgewater's R’n’B-ish stylings, but her effort on these songs is real and cannot be dismissed. Bridgewater had the privilege of meeting Ella on multiple occasions, and seems to have been genuinely influenced by her singing and her personality. This project seems to be her way of bidding farewell to jazz's true First Lady of Song.

A-Tisket, A-Tasket; Mack The Knife; Undecided; Midnight Sun; Let's Do It (Let's Fall In Love); How High The Moon; If You Can't Sing It, You'll Have To Swing It (Mr. Paganini); Cotton Tail; My Heart Belongs To Daddy; (I'd Like To Get You On A) Slow Boat To China; Oh, Lady, Be Good!; Stairway To The Stars; Dear Ella.