Mark Lockheart & the NDR Big Band: Days Like These 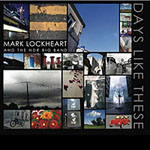 Considering the instrumental forces that the big band offers, it's surprising how conservative a lot of large ensemble writing is. Days Like These isn't iconoclastically innovative, but there's enough on offer to satisfy those who find such conservatism tiresome.

Saxophonist Mark Lockheart clearly appreciates what he has at his disposal for all of the relatively conventional section scoring. NDR is a band that embraces rhythmic precision, even as it remains loose enough to avoid sounding drilled. Despite the cyclical, quasi-minimalist figure that comprises the heart of the opening "Rag," the music is marked by an urgency which prevails—even in moments of near-comedy, where the spirits of silent movie comedians come to the fore.

"Busby Berkeley Parts 1 & 2" is appropriately replete with a twirling motif which, given the tempo, is as rife with unease as it is with anything brighter. It's down to the scoring to alter that impression, and the subtle use of voicings brings this about, along with the work of an unaccredited trumpet soloist and the deft touch of pianist Nils Gessinger.

"In Two Parts" turns out to be anything but; still, the use of irregular intervals sets up a nice contrast between rhythmic momentum and a sense of reflection generated by the sensitive use of flutes. Trombonist Dan Gottshall is one of the band's most distinctive soloists, however, and he makes the most of his opportunity.

"End Of A Chapter" is, perhaps, unsurprisingly reflective. Flautist Fiete Felsch fills out the opening passage in an unexpected manner, given that instrument's sometimes wistful nature, but it's the work of tenor saxophonist Christoph Lauer that pitches both with and against the composition's essentially languid nature. For his part, Gessinger spins lines out in a manner both reflective and sensitive.

All of these pieces are marked by a singular but shared musical sensibility, but the same can't be said for "Strange Remark," which possesses so many surface discontinuities that it's remarkable how well it hangs together. The saxophone writing could almost stand as a work in itself, and Lockheart turns in his most telling solo of the program.

Rag; Busby Berkeley Parts 1 & 2; Days Like These; Strange Remark; In Two Parts; Man With A Yellow Case; End Of A Chapter.