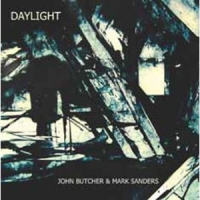 There is a visceral energy that drives the music on Daylight and all of this has to do with the wonderful musicality of saxophonist John Butcher and drummer Mark Sanders. From the sense of moist breath that courses through Butcher's horn—as interspersed with breathy growls, guttural smears and sensational squeaks and wails, depending on the emotional prompts of the improvised score—to the primordial echo of Sanders' drums, the music turns a whole palette of colors and hues as it unfolds in all its diaphanous glory. Both musicians find their magical and mystical levels by immersing themselves in the colors of the music as it sings to them in the deepest recesses oftheir minds and hearts. In fact, the dichotomy of nocturnal inspiration unveiling itself dappled by the sun is prescient throughout the record.

Butcher's part in what appears to be an almost continuous score, swirls and darts in and out of the shadows. The saxophonist builds an amorphous structure of sound into which he plunges with tenor and soprano saxophone. Inspired by the tone and timbre of each of the instruments, he twists and turns with the push of every key. There are times when his playing imitates the very breath of life as it drives the pulsations of the human body. This becomes an even more glorious artistic pursuit when Butcher adds subtle shades and sometimes even riotous color to the shrieks and growls and speech-like notes that fly out of the bells of his woodwinds. These are sometimes repeated and, as this is done, the notes turn numerous shades of the color that the tonal center of each note presents.

Sanders is a percussionist colorist in his own right. He starts by finding the pulse of the music and setting the framework of the musical fibrillation. This is a constantly shifting meter sometimes dictated by where Butcher has taken the music; at other times where Sanders and his drums are vibrating. Depending on whether he is using sticks, mallets or brushes, Sanders' music dwells in a state of constantly changing colors. His brassy swishes on cymbals create bright gold auras within which the music propels itself onward and upward, simulating the ebb and swell of titanic waves lapping at the feet of the saxophonist, who responds with brilliant shimmering hues of his own.

As a duo the saxophonist and the percussionist are both joined at the hip as well as float and dance freely around each other. Their music is as much an audio sojourn as it is a visual delight in the fourth dimension of the soul. What it does is create the imagery of two free-floating musicians dancing around each other like the proverbial double-helix, at times, but also more often than not in a kind of freedom dance that can only come when two musical souls are so united that amorphous music they create becomes the fascinating dance of the very light of life itself.