By John Sharpe
February 5, 2022
Sign in to view read count 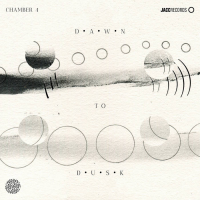 The third album from the French-Portuguese collective Chamber 4 might be the aural equivalent of comfort food. A nourishing feast of spontaneous communal navigation which slips down easily, but leaves you wanting more. Not that there's any attempt to replicate past glories from their eponymous debut (FMR, 2015) or City Of Light (Clean Feed, 2017).

Instead the unchanged cast of trumpeter Luis Vicente, guitarist Marcelo Dos Reis and the brothers violinist Théo Ceccaldi and cellist Valentin Ceccaldi once again check ego at the door and dedicate themselves to unearthing endless variety and novel combinations without anything that could be characterized as a solo.

The band's name also remains apt, as an intimate introspective quality pervades much of the program, though without precluding more rowdy excursions beyond the drawing room when the mood takes them. While programmatic intent is unlikely for this live recording from October 2020, and it's odds on that the titles were added after the fact, there's no denying that the suggestion of a narrative arc from imperceptible morning stirrings to crepuscular subsidence is hugely fitting.

The annunciatory long tones of "Dawn," punctuated by dos Reis' two-note guitar pulse evoke an awakening, like sunrise piercing the mist, while Vicente's murmurs and splutters can be heard as the cries of animals and birds welcoming the light. It's beautiful, timeless music, slow moving but containing a restless scurry, manifest initially by Vicente's trumpet skitter, but later by Ceccaldi's harsh violin plucks, which could be interpreted as indicative of the day's events.

But even at the heart of such spiky exchanges there resides a concern for melody and consonance, whether from Vicente's Miles Davis inflected lyricism or the Ceccaldi siblings baroque stylings. Furthermore, as on previous outings, dos Reis often furnishes minimalist elements of structural continuity, through repeated motifs, gently insistent guitar figures around which his partners swirl in glacial mutation.

And when he does step out, there's usually someone on hand to pick up the thread, as does Ceccaldi with his anchoring cello drone on the brief "To." To complete a totally captivating journey, at the conclusion of "Dusk" delicate guitar harmonics, trumpet susurrations and hushed string overtones gradually wind down, hinting at impending darkness, and then silence. Such masterful interplay on-the-fly speaks of a group ethos which has been thoroughly internalized, the better to weave its magic spell.