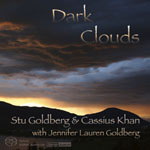 Stu Goldberg garnered initial attention as a member of John McLaughlin's mid to late-1970s Mahavishnu Orchestra and One Truth Band, but the keyboardist seemed to disappear off the map soon after. In the intervening years he's been busy as a film scorer and has recently begun to re-established himself as a leader on a series of albums focusing on his acoustic piano skills. But while Going Home (Rhombus, 2001) and Dedication (Dedication, 2002) were more conventional in terms of instrumentation, general jazz-centricity and consistent lineups, Dark Clouds is another beast entirely.

Goldberg met Canadian-based tablaist/vocalist Cassius Khan at a local club in Penticton, Canada, and a visit shortly thereafter to Goldberg's studio found the two improvising as if they'd been playing together for years. While those recordings aren't the basis of Dark Clouds, they set the stage for a subsequent session where two lengthy improvisations bookend two shorter pieces: a song by vocalist Jennifer Lauren Goldberg and a pure percussion duet.

Lauren Goldberg has a whispery yet soulful voice. "Rain," with a different treatment, could easily be transposed into the pop world, while on the nineteen-minute title track, her loose call-and-response with Khan's plaintive singing demonstrate even greater breadth. "Keherwa" is based on a rhythmic cycle with Goldberg on frame drum and clay udu igbah, trading off with Khan before the two blend together in exciting unison.

But the core of Dark Clouds is the two improvisations. Goldberg's stream-of-consciousness approach is reminiscent of Keith Jarrett, but with a stronger world music focus. The undeniably virtuosic player builds the 21-minute "Ragamala" from empty space into greater drama that's as much rooted in gospel and blues as it is Indian classical music. Khan's equally capable, and while there are moments when the two feel a touch out of synch—Goldberg laying down broad and spare chords while Khan plays at lightning speed—more often than not, they work well together. This is a meeting of equals, each capable of following the other's lead but equally, through moments of tension, driving the music in other directions.

What makes the improvisations on Dark Clouds work is the feeling that, despite the spontaneity at play, there's a subconscious game plan. Duets can often be the most vulnerable of musical interactions, since there's nowhere to hide if the players aren't in touch. But while the risks taken on Dark Cloud result in brief moments where Goldberg and Khan have to catch up with one another, for the most part they move with a singular and unspoken purpose.