By AAJ Staff
September 7, 2002
Sign in to view read count 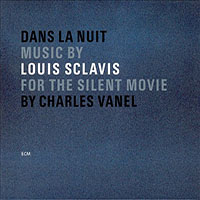 The ever-unresolved paradox of soundtracks is that in some sense they require a film to make "sense" of the music. But of course, there's also a delicious puzzle in listening to that very same music on its own. Such an experience can allow imagination to run rampant, taking moods and contrasts in sound and translating them into mental imagery.

In the particular case of French clarinetist Louis Sclavis's soundtrack for Charles Vanel's 1930 film Dans la nuit, most listeners would be hard-pressed to get their hands on this recently-restored silent movie. So we must be content to listen, allowing the music to lead us wherever it's headed—filling in a walk through town, the sudden interruption of a door swinging open, the intensity of conversation, or the open space of a daydream. Sclavis has done a wonderful job in this respect, providing a surprisingly wide range of colors and textures. The Old World sounds of clarinet, accordion, and strings resonate throughout (Sclavis hails from Lyons, just like Vanel). And for the most part, the tone of Dans la nuit tends toward the softer side of neutral. While there's a light, lilting jazz element in many pieces here, Sclavis clearly built them upon a compositional framework. And rather than take advantage of the full density possible with this instrumentation, the quintet mostly prefers to lie low and let individual voices sing with clarity and nuance.

Highlights from the disc include the stark and gentle minimalism of "Retour de noce"; the budding energy and counterpoint of "Le travail"; and the fun rhythmic group interplay on "La fuite." Three versions of the title track offer alternate takes on a sentimental, romantic theme. Listeners with a limited tolerance for Old World romanticism are strongly encouraged to look elsewhere, but for listeners without this handicap, this is interesting stuff.

It's hard to know how much we're missing without the film that accompanies this soundtrack, but in the end it doesn't really matter. The lack of explicit imagery allows this music to suggest people and events through implication. Sclavis, who's repeatedly proven his insight and vision in other settings, stands out in this context and catalyzes some wonderfully evocative playing. Highly recommended.