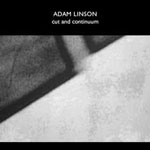 Whatever your reaction to the words "solo bass album, Adam Linson's debut will probably change your mind. Previously best known—if at all—as the bassist in Evan Parker's Electro-Acoustic Ensemble on The Eleventh Hour (ECM, 2005), Linson is here given centre stage and produces a recording that commands attention. His album of solo double bass largely eschews the virtuoso vocabulary that one might expect, substituting a closely recorded, tightly focussed sound in which it is never entirely clear where playing ends and processing or sampling begins.

Although the album notes say it was "recorded in real time, they also reveal that track 1 "contains additional samples from track 3, making the actual process something of a conundrum. However, the music here makes such distinctions entirely irrelevant; all that matters is the end product, not the means of production.

The album consists of three long pieces (the shortest is over fourteen minutes, the longest nearly half an hour). That is significant; solo bass albums too often contain a series of shorter tracks, each a kind of party piece that does not develop much and so must not outstay its welcome. The music here is the complete opposite; it uses long durations to establish a mood and then develops and goes beyond that. Each of the pieces has a pulse (but certainly not a beat!) that keeps driving it along.

Layers of sound—some played, some sampled, some of indeterminate origin—are deployed to build up a soundscape that is full without being cluttered; all the pieces of the jigsaw fit together and complement each other well. Some of those jigsaw pieces are clearly double bass, bowed rather than plucked, with an attraction to the bottom end; rich, deep booming bass passages are not uncommon. Other pieces are obviously not bass—high frequency rustlings from no known instrumental source. Taken together, the combination of these layers forms a shifting collage that has an immediate surface appeal but—more importantly—reveals new riches with every listen.

Cut and Continuum is an album I'll still be listening to decades from now, and Adam Linson is a player I want to hear far more.