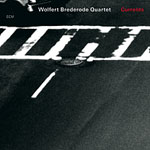 Along with Norwegian trumpeter Mathias Eick's first disc as a leader, The Door, ECM's North American release of pianist Wolfert Brederode's debut on the same day is more than happenstance. At 34, Brederode is a few years older than Eick, but the two share much in common. Both are firmly committed to melody as a strong stylistic definer and both have already recorded for the label, in Brederode's case with singer Susanne Abbuehl on two albums including the emotionally far-reaching yet ever-understated Compass (2006). With Brederode's line-up on Currents mirroring that of Abbuehl's group—piano, clarinets and drums, but here expanded to a quartet with the addition of Norwegian bassist Mats Eilertsen—it would be safe to assume certain aesthetic similarities. Still, with Brederode as the primary composer, there are plenty of differences as well.

Recruiting drummer Samuel Rohrer from Abbuehl's April (ECM, 2001), creates yet another reference point to the Swiss-born/Holland-resident singer's less-is-more approach. Rohrer may excel as a textural sound painter, but he's also an undeniably rhythmic player—oftentimes more implicitly so. On the opening "Common Fields," driven by Brederode's gradually evolving arpeggios, he works in kind, a light but propulsive cymbal providing forward motion reminiscent of a young Jon Christensen, but intensifying through the gradual introduction of the rest of his kit, creating a turbulent undercurrent that's more expressionistic than anything found in Abbuehl's work.

By substituting Claudio Puntin on clarinets rather than Abbuehl reedman Christof May, Brederode aims for a complexion as melody-centric as The Door but, with Puntin's contrapuntal exploratory élan, the pianist approaches improvisation from a more contemporary classical frame of reference. Puntin—who may not be a familiar name to many ECM fans but whose duet disc with Icelandic singer/violist Gerður Gunnarsdótir, Ýlir (ECM, 2001), remains an underappreciated treasure—interacts with Brederode on near chromosomal levels, whether on the poignant yet harmonically offsetting "Empty Room" or the brooding and introspective "As You July Me," a collaboration by Brederode and Abbuehl that features Puntin's dark-hued bass clarinet.

Eilertsen—another familiar ECM face from guitarist Jacob Young's Sideways (2007), electroacoustic percussionist Thomas Strønen's Parish (2006) and The Source's self-titled 2006 release—is, like Rohrer, a player equally capable of melodic counterpoint and nuanced color as he is a more conventional anchor, in some cases all at once. Across the broad dynamics of "High & Low," the bassist's rich, woody tone brings sonic focus to the coalescing streams around him.

Throughout, Brederode's writing and playing demonstrates visible markers of some of ECM's classic groups—Jan Garbarek/Bobo Stenson Quartet, Keith Jarrett's European Quartet, John Abercrombie's quartet with Richie Beirach and Ralph Towner's Solstice group—while sounding like none of them. Currrents' vivid ebb and flow makes it an apt title, and presents an alternative but no less fervent melodic intent to Eick's The Door, suggesting that their concurrent release is anything but a coincidence.