By Brandt Reiter
October 10, 2008
Sign in to view read count 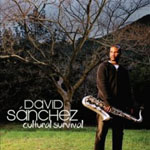 Never one to play it safe, the adventurous Puerto Rican saxophonist David Sánchez has switched record labels, leaving Sony Music after a fruitful 11-year stint that culminated in a Latin Grammy for Coral, his 2004 CD of Latin classics with strings. He’s also revamped his band—out is longtime alto sax associate Miguel Zenón (who’s since emerged as a terrific leader in his own right); replacing him in the ensemble’s frontline is the young Norwegian guitarist Lage Lund, winner of the 2005 Thelonious Monk Guitar competition. Shaking things up further, the 40-year-old Sánchez has mostly abandoned keyboards for his first recording as leader in four years and Concord Records debut; though ivory men Danilo Pérez and Reginald Rodriguez both make guest appearances, the piano chair remains vacant for five of the disc’s eight cuts. These are all gutsy moves and they pay off handsomely: Cultural Survival is a work of dark urgency and shimmering power from one of the most consistently ambitious tenorists of his generation.

What remains constant - no surprise given Sánchez’ island heritage—is the saxophonist’s predilection for propulsive Afro-Cuban and folkloric rhythms, richly provided here by crack drummers Adam Cruz and Henry Cole (four tracks each) and percussionist Pernell Saturnino (and, on the disc’s epic closer, “La Leyenda del Cañavera,l, by the leader himself; Sánchez played conga before picking up the sax at the age of 12).

But, as so often with Sánchez, these rhythms are the ledge from which to leap, not an end in themselves. For Sánchez is far from the “Latin” artist he’s often (unfairly) pegged to be: Cultural Survival’s real reference point is the peculiar harmonic language of Wayne Shorter and even salsa legend Eddie Palmieri’s “Adoración” veers decidedly into post-bop territory in Sánchez’s hands. (The presence of Shorter’s current pianist, the brilliant Pérez, and a tender reading of “Monk’s Mood,” the disc’s other cover, leave little doubt about where Sánchez’s heart lies.)

Comprising the bulk of the disc are six arresting Sánchez originals, widely varying in tone and color: the densely packed opener, “Coast to Coast” (on which Lund is effective both in support and carving out his own sparkling space); the airily expansive “Manto Azul”; the vibrant, thorny “Ay Bandito”; the romping and tumultuous title track; the wistfully passionate “The Forgotten Ones” and, most striking, the aforementioned “La Leyenda del Cañaveral.”

Taking as its inspiration a poem by Sánchez’s sister, Margarita, which documents the travels of African slaves to sugar cane plantations, “La Leyenda del Cañaveral,” at 20+ minutes, is an entire voyage in itself—and, though not without its moments of bewilderment and confusion, a voyage that’s surprisingly brimming with hope. Or perhaps not surprisingly at all, for, filled with resilience and wonder, “Cañaveral” looks forward, not back—like the intrepid Sánchez himself, who continues to forge his own idiosyncratic path and refuses to be bound by labels, or tradition, or expectations—or even success.