By MARK SULLIVAN
December 15, 2018
Sign in to view read count 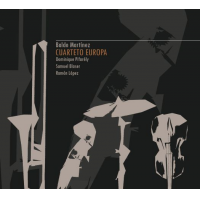 Spanish bassist/composer Baldo Martinez (founding member of the bands Clunia and Zyklus; worked with trumpeters Kenny Wheeler and Paolo Fresu, pianist Joachim Kuhn and others) leads the aptly named Cuarteto Europa (Quartet Europe) with French violinist Dominique Pifarély (probably best known for his ECM recordings, as a leader and with reedist Louis Sclavis), Swiss trombonist Samuel Blaser (who has been associated with players like double bassist Thomas Morgan; drummers Paul Motian, Gerald Cleaver and Pierre Favre; and guitarist Marc Ducret) and Spanish drummer Ramon Lopez (now a French resident, he has been the drummer for the National Jazz Orchestra and has performed with a wide variety of jazz players). The leader is responsible for most of the compositions (except for one by López), but the arrangements sound like a band of equals.

Opener "Isla De Piedra" has an intriguing compositional structure. After a reflective rubato opening and a free violin solo the band comes together for a sprightly double-time free-bop theme. A trombone solo comes out of that, followed by an unaccompanied bass solo—then a reprise of the opening theme. The performance demonstrates the balance between composition and freedom common to the entire album, as well as the gifts of the band members.

"La Travesía" is built on a bass ostinato pattern, played very freely until Martínez finally drops it altogether (but not without maintaining the pulse, even walking a bit). "Vuelta De Tuerca" features Pifarely's violin in the beginning, playing a kind of cadenza with band interjections: the bridge again brings the group together for a new theme. "Sombra" is a sombre rubato exercise for the entire ensemble. "Tiempo Perdido" opens with a reflective unaccompanied trombone solo from Blaser, eventually bringing the quartet together for a theme and solos.

Lopez's "Contemplando (Contemplating)" is indeed a contemplative drum solo. "Puente Del Estrecho" gives him a chance to utilize his Indian classical music studies for a bit of tabla playing. After a jerky introduction, closer "Locura Otoñal" launches into the most rhythmic music in the set, an exciting up-tempo dash to the finish line. And a fine ending to a satisfying collection of creative contemporary jazz.