By DAN MCCLENAGHAN
March 22, 2019
Sign in to view read count 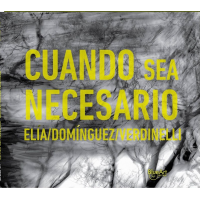 Argentine pianist Eduardo Elia explored the classic jazz tunes on his 2015 release, Solo (Blue Art Records), making the familiar distinctively his own. He shifts gears for Cuando Sea Necesario, bringing on board saxophonist Rodrigo Dominguez and drummer Sergio Verdinelli, for what sounds like a set of loosely-constructed compositions which leave plenty of room for inspired group improvisations that dig deep into making in-the-moment sounds of the highest order.

Two thoughts come to mind on an initial spin of Cuando Sea Necesario: firstly, the sound sculpted by the trio has the feel of an unsettled air blowing and roiling into the landscape—not of a howling hurricane but more of crisp winds and rumbling thunder, gusts that shake the windows without threatening to blow the roof off the house; and secondly, an Ornette Coleman-with-piano vibe prevails, the free jazz alto saxophonist's recordings with pianist Geri Allen—the two Sound Museum (Harmolodic/Verve, 1996) sets—and also Colors (Verve, 1997), a duo recording with pianist Joachim Kuhn.

A Coleman influence isn't a surprise—Elia included two of the saxophonist's tunes on Solo. But that isn't to say that the tenor saxophonist on Cuando Sea Necesario—the previously noted Rodrigo Dominguez—sounds anything like Ornette Coleman on plastic alto, or Ornette On Tenor (Atlantic, 1962) for that matter. But this Elia trio does have a similar elastic, method-to-the-madness approach to making music, beginning with "La Formula," which rides the rhythm of a circular piano riff, long tenor lines groaning, drum sounds tumbling out of the clouds.

The album boasts a cohesive mood, a beautiful, searching, shades-of-grey sound, beginning-to-end, with the tune "Pf2" evoking the beginnings of the storm, the spattering of raindrops, the moaning of a cold wind, leafless branches rattling against the rooftops, where the title tune evokes images, initially, of a solitary, aimless and perhaps melancholy post-storm walk under heavy cloud cover, until the rain renews and the wind picks up again, putting an urgency into the walker's stride.

The disc closes with "Sin Tocar El Suelo," a dark ballad full of brooding buoyancy, wrapping up the music nicely.