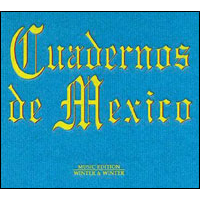 Spend more than a couple of days in Mexico and it becomes readily apparent that people there make music in a very different way than they do in the United States or much of Europe. Stop to sip tequila in a cantina, and musicians will stop by on a regular basis to offer a song, scattered amongst the flower sellers, shoe-shiners, and other traffic drifting through.

For a relatively small amount, depending on the situation, you can have a private serenade by guitar-wielding troubadours, singing songs of your choice in three-part harmony. Or, if you're lucky, a couple of guys might set up a marimba in the corner and play bouncy four-mallet melodies. Music is on the street, inside and out—everywhere.

Most outsiders are familiar with only one or two styles of music from Mexico, usually mariachi music (son performed by entertainment-oriented groups dressed in ornate matching uniforms) or norteño (ten-gallon-hat country music from the North), depending on how close they may live to the border. But Mexican folk music exists in many forms, localized to specific regions with their own particular instruments and influences. Like any true folk music, it's music of the people by and for the people, and it can offer a dramatic window into culture.

Producer Stefan Winter, whose record label is usually devoted to experimental composed and improvised music (of which the meatiest core is jazz), has on more than one occasion tapped into alternative musics from outside familiar territory. The five-disc Cuadernos de la Habana ("Notebooks of Havana," Winter & Winter, 1999) took the form of a colorful notebook documenting Cuban music at its folk roots. Consider the three-disc "audio film" (the producer's words) Cuadernos de Mexico a sequel of sorts, devoted to the music of Mexico's southern heartland extending south from Mexico City through the states of Veracruz and Oaxaca. It comes in a beautiful cardboard case with a 60-page booklet of photos, art, and documentation.

In March of 2004 Winter joined Mariko Takahashi, graphic artist Günter Mattei and sound engineer Andrés Mayo on a trip from Mexico City east and south, then back. They recorded musicians in various settings, placing them in context with ambient sounds from all around, in addition to extras like El Negro Ojeda's brief speech on the importance of hope, musical sustenance, and tradition. Over the course of ten days in Mexico, the team recorded sixteen groups. According to Winter, it's "music that should never be forgotten, because this is a true music that is very hard to find in our Western world dictated by naked commerce." Amen to that.

Trying to pick highlights from these three hours of music is a difficult exercise because of the sheer numbers: each group has something of its own to offer, and listeners will have different affinities for given instruments or styles. Some of the most welcoming sounds come from Marimba Nandayapa, a father-and-sons marimba outfit which was started way back in 1956 and operates a marimba shop in Chiapas. Mallets on wood have a warm, inviting quality, and this operation knows how to balance technical skill with romance and soul.

El Negro Ojeda's simplified guitar-voice duet "Mi México" leads right off the singer's words on hope, heading magically and almost mystically off as church bells ring in the background. If you close your eyes, you might just find yourself transported to the very spot. Following more street sounds, the guitar trio Los Caminantes (led by Wilbert Paredes, master of Yucatecan trova music) offers some relatively straightforward songs that you can tap your toes to and hum along with.

Next stop: Veracruz, and six groups from Mexico's east coast—specifically the region most closely associated with Caribbean music, especially forms from Cuba. Their main instrument is the jarana, a guitar-like device with doubled strings and very limited sustain. Alone, a jarana is not particularly impressive, but when doubled and tripled in counterpoint, it takes on new life. The zapateado, both a dance and a dull, diffuse-sounding percussion instrument, is also a bit difficult to appreciate on first spin, but after three minutes of "Zapateado" it feels almost like a pulse.

It's a pleasure to hear female singers in this context, where a smoother and more natural delivery helps lubricate the Veracruzano roughness. Silvia Santos Castillo offers two traditional tunes with the Hikuri quartet, child-like in their simplicity but still laden with raw group energy. The five-strong family outfit Los Campechano offers up a seven-minute rendition of "La Bamba" complete with a sassy foot-stomping syncopated rhythm.

Last stop: Oaxaca, home of Pancho Tina, who sings and plays the Panchofón (a harmonica-like instrument, which, best I can guess, is his own invention). Yes, those are a whole lot of chickens in the background. The sound quality is definitely of the field recording sort, but you get a sense that Pancho has been doing this for a while—and I bet he knows his chickens, too.

Solo and duos appear later as a respite from the otherwise busy music-making, only to be interrupted by the four-horn/three-drummer Banda Musical Don Pepe, who assemble an odd-sounding combination of boisterous blasts and nearly military precision. The record closes out with a return to Mexico City and a very professional-sounding collection of songs by Susana Harp, whose voice has a rare magnetic quality, with guitar and percussion.

The 60-page booklet that comes with this music documents sights from Mexico City and the countryside, including a photo of an armadillo shell with the Virgen de Guadalupe and pictures of buildings, money, and folk art. The distinctly Mexican images of Zapata and vochos (the ever-popular VW Beetles that inhabit Mexico City) are accompanied by random sightings that are more difficult to pin down. None of this would be complete without a "Tope" sign (an ever-present reminder on the road of speed bumps just ahead).

On a personal note, I shared this recording (and the accompanying art) with my wife, who is Mexican, and found her oddly singing along at the strangest times. This is the real thing, folks, unadulterated and pure: Mexico. An inspiration and a revelation of the highest order.