BY DOUG COLLETTE
October 26, 2009
Sign in to view read count 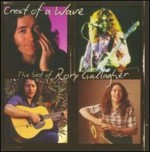 Even a died-in-the-wool Rory Gallagher aficionado may wonder if there is really a need for another anthology of the man's work. But the late Irish blues-rocker never did get the attention he deserved and remains an unsung hero of the blues-rock genre even to this day.

Certain previous anthologies, even the sumptuously-packaged, 5.1 SuperAudio formatted Big Guns (Sony/BMG, 2005) found some disfavor with consumers due to sound quality concerns and this one suffers somewhat in that respect too. Granted, the overly-trebly texture might suit the somewhat antique nature of the music, but it doesn't fully allow the display of dynamics within Gallagher's musicianship, in particular the gritty sound of his guitar. Those minor reservations aside, largely because the sound deepens thorough the course of the two discs, Crest of a Wave: The Best of Rory Gallagher has its own raison d'etre.

Even the dilettante who might be comparing the various Gallagher collections already in existence will find all two-dozen tracks eminently familiar. As nephew Daniel Gallagher emphasizes in his liner notes in the colorfully designed cd booklet, this set focuses on the guitarist/singer/songwriter's composing skills.

And it's true that while Gallagher was a searing instrumentalist ("Shadow Play"), capable of real delicacy ("Calling Card") even when he wasn't playing acoustically, as on "Wheels Within Wheels," his playing generally found its context in well-constructed pieces of music not just riffs to be hammered out with a rhythm section (thought he could do that with his accompanists as on "Bad Penny"). Nevertheless, the man generally elevated himself and his comrades far above that level as on "Walk on Hot Coals" or "Shinkicker."

Well-wrought compositions such as the diverse likes of "Calling Card," "Philby," and "Barley & Grape Rag" no doubt leavened Gallagher's skill as a recording artist. Each such number, like this title song too, provided structure within which to sing and play intelligent arrangements. While Gallagher had his readily identifiable style, distinctively rooted in country-blues, vintage rock and roll, as well as the elemental electric blues that made him a contemporary of Eric Clapton, Jimmy Page, and Jeff Beck, no two of his studio albums sounded similar to a fault. All titles, such as Against the Grain (Buddha, 1975) and Photo Finish (BMG International, 1978), are detailed on the liner notes in print and in graphics for an effective resource (with the possible misprint of Out on the Western Plain which isn't listed in discographies official or otherwise).

While even the best of this set only hints at intensity of Gallagher as he prowled the stage brandishing his guitar as a talisman of kinship with his audience, a similar cross-section of concert material may be forthcoming. It would be no less welcome than this one, if prepared with comparable taste, insight, and (a bit more) technical preparation.

CD 1: Follow Me; Shin Kicker; Do You Read Me; Bought & Sold; Loanshark Blues; In Your Town; Calling Card; A Million Miles Away Walk On Hot Coals; I Fall Apart; Tattoo'd Lady; Crest of a Wave. CD 2: Bad Penny; Overnight Bag; Philby; Shadow Play; Moonchild; They Don't Make Them Like You Anymore; Edged In Blue; Wheels Within Wheels; Out On The Western Plain; Out Of My Mind; Barley & Grape Rag; Lonesome Highway.